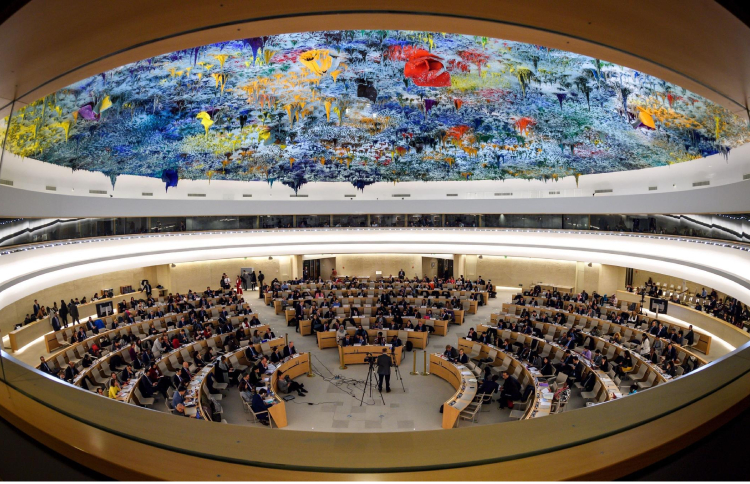 Although Amnesty International and Western governments condemned Iran’s violation of human rights, Iran’s representative at the review session of the UN Human Rights Council in Geneva, claimed that the Islamic Republic of Iran is one of the largest democracies in Western Asia and needs no Special Rapporteur.

Javad Larijani, Iran’s representative to the UN Human Rights Council in Geneva claimed that the UN Special Rapporteur’s opinion reflects that of Iran’s main opposition group, the People’s Mojahedin of Iran (PMOI-MEK-Iran) and that he receives his documents from the MEK.

Larijani’s claim comes at the time when on November 6, 2019, Amnesty International released a statement calling for the international community to “publicly condemn the deterioration in Iran’s human rights record during the country’s upcoming review session at the UN Human Rights Council in Geneva on 8 November”

“From horrific execution rates to the relentless persecution of human rights defenders, rampant discrimination against women and minorities, and ongoing crimes against humanity, the catalog of appalling violations recorded in Iran reveals a sharp deterioration in its human rights record,” said Philip Luther, Research and Advocacy Director for the Middle East and North Africa at Amnesty International.

“For decades Iran has flagrantly violated its citizens’ human rights”, the US representative Mark Cassayre said, adding:  “We urge the government to allow the Special Rapporteur on Iran to visit the country and investigate existing practices.”

“We remain deeply concerned by Iran’s failure to uphold international legal obligations, and its arbitrary detention of citizens and dual nationals arrested on unclear charges denied due process and subject to mistreatment.” Miriam Shearman, UK’s deputy representative to the UN in Geneva said.

Larijani is representing a regime that is the world’s worst human rights abuser and has executed over 120,000 people and imprisoned and tortured many more.  In the summer of 1988 alone, based on a religious decree by Khomeini, over 30,000 political prisoners, mainly members, and supporters of MEK were executed in just a few months.

In July 2019, Mostafa Pourmohammadi, regime’s former Minister of Justice and a member of the “death committee” responded to 1988 executions and defended the horrendous act as “execution of terrorists”. In the same month Amnesty International released a statement regarding Pourmohammadi’s remarks, which in part reads:

“Recent statements by Mostafa Pourmohammadi, advisor to Iran’s head of the judiciary and a former minister of justice, defending the mass extrajudicial executions of 1988 provide shocking confirmation of the authorities’ wilful flouting of international human rights law both at the time and now and a stark reminder of the sense of impunity that senior officials linked to the killings enjoy, Amnesty International said today. The organization is particularly concerned about comments by Mostafa Pourmohammadi accusing those advocating for truth and accountability of “terrorism” and “collusion” with Iran’s geopolitical enemies, and warning that they shall face prosecution…Current and former Iranian officials must not be allowed to shield themselves from accountability for the mass extrajudicial executions through campaigns of disinformation and threats of reprisals against anyone looking to shed light on them.”

In his speech to Thursday’s session in Geneva, Larijani questioned the Western governments why they have accepted MEK members in their countries. Translation of his remarks which was presented in mullah’s culture is that why the Western governments have not hanged the MEK members in public like the “largest democracy in Western Asia” and why they are respecting their rights.

Moreover, the Iranian regime took another unprecedented and disgraceful step to present  “An exhibition of the Islamic Republic of Iran’s achievements in the field of human rights”

Morgan Ortqgus the spokeswoman for the US State Department responded to this act in a tweet: “A new human rights exhibition from the folks who brought you repression of women, execution of children, religious intolerance, and a crime against humanity too long to list. Astonishingly, this shameless hypocrisy by one of the world’s worst human rights abusers is not a joke.”

A new human rights exhibition from the folks who brought you repression of women, execution of children, religious intolerance, and crimes against humanity too long to list. Astonishingly, this shameless hypocrisy by one of the world’s worst human rights abusers is not a joke. pic.twitter.com/LsIhZ3vWFr