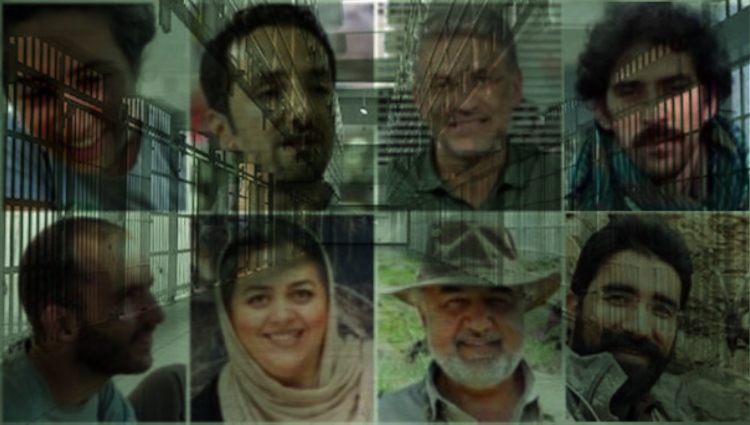 The representative for the Iranian judiciary announced Tuesday that the prison sentences of eight environmentalists, sentenced to a total of 58 years in prison, were upheld by the court of appeals without the defendants‘ lawyers being present.

Judiciary spokesperson Gholamhossein Esmaili said in a press conference that the sentenced environmentalists, who were arrested in January and February of 2018, had been charged with “acting against national security” and espionage against the state, despite having presented no evidence that the environmentalists were spying.

This is being seen as an attempt by the regime to intimidate the public in the run–up to elections on Friday. The regime often uses charges of “national security” and “waging war against God” to sentence political dissidents to long spells in prison.

The environmentalists, who are all members of the private non-profit organization the Persian Wildlife Heritage Foundation (PWHF), which is dedicated to conserving and preserving wildlife in Iran, were kept in prison for several months without charges, many of them in solitary confinement.

PWHF founder Kavous Seyed-Emami was arrested at the same time but died under suspicious conditions just a couple of weeks after his arrest. The authorities claim he committed suicide, but there is strong evidence, including medical reports citing bruises and an injection, that he was murdered.

The Iranian authorities often claim that prisoners who died in their custody committed suicide, as they did for dozens of those arrested during the 2018 uprisings, but there is evidence to suggest these people died under torture.

There is plenty of evidence that the security forces tortured the other PWHF members as well, with Bayani reportedly enduring 1,200 hours of torture by the Revolutionary Guards to make her give a false confession. The interrogators said that she would be sexually assaulted or would be killed unless she confessed.

The state security forces are also torturing and killing those arrested during the November 2019 protests who refuse to make false confessions. This is not surprising when you consider that the Iranian judiciary is headed by notorious judge Ebrahim Raisi, who served on the Death Commissions in 1988 and sent thousands of political prisoners, mostly members of the People’s Mojahedin Organization of Iran (PMOI/MEK), to their deaths.

CNN: An Iranian opposition group says it has disclosed...