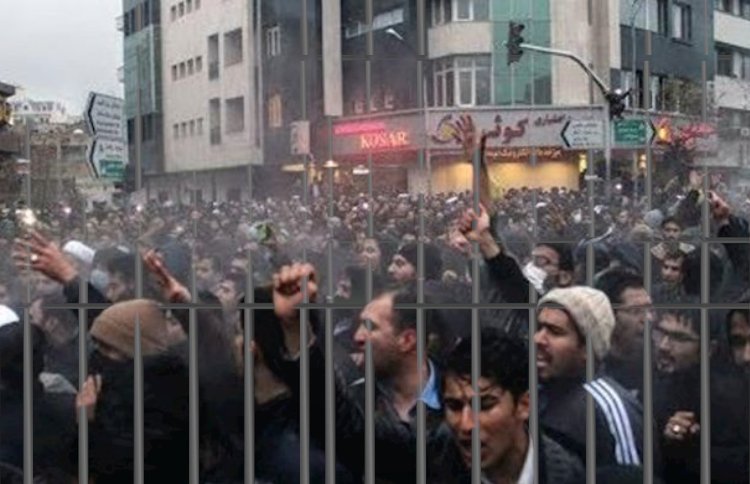 The Iranian authorities have not yet revealed exactly how many Iranians were arrested during the November 2019 uprising, but they have begun to issue harsh sentences against a number of them.

Gita Horr, arrested on November 21, was sentenced to six years in prison; five for “assembly and collusion against national security” and one for “propaganda against the state”.

Kianoush Jamali, 27, was arrested on November 19. He was sentenced to 7.5 years in prison for “assembly and collusion against the state” and insulting supreme leader, Ali Khamenei and President Hassan Rouhani.

Mohammad Eghbali Golhin, 29, was also arrested on November 19, and eventually charged with “destruction of public properties”, “disruption of order and public calm”, and “clashing with Bassij agents”. He was sentenced to a total of 11 years in prison, 74 lashes, and one year in exile in Rask, a desolate village in Sistan and Baluchestan.

Ali Nanvaii, a Tehran University student, was arrested on November 18. He was charged with “assembly and collusion against the state” and “disruption of public order”.

He was sentenced to six years in prison and 74 lashes, which has been suspended for two years. Nanvaii must write from three books designated by the court; “The boy selling Falafel”, “the foot left behind”, and “three minutes on the reckoning day.”

Siamak Moghimi Momeni, 18, was given a 10-year prison sentence for “assembly and collusion,” “propaganda against the state,” and insulting Khamenei and Rouhani.

Milad Arsanjani, 31, was sentenced to five years for “assembly and collusion against the state,” and insulting Khamenei and Rouhani.

In related news, children arrested during the anti-regime protests in Iran in November 2019 are being detained alongside adults in the Greater Tehran Penitentiary because their families cannot afford the high bail.

One of these minors is Abolfazl Maghsoudi, 17, whose bail bond is 500 million tomans and the judicial authorities will not reduce it.

Maghsoudi has been the family breadwinner since the death of his father. Maghsoudi, who was working in stone masonry and taking night classes, has continued to work during his detention to cover his expenses.

Maghsoudi was arrested on November 17 by the Intelligence police and taken to a detention center for interrogation. He was transferred to the Greater Tehran Penitentiary on November 21.

In the three months since Maghsoudi has remained under examination in the Public and Revolutionary Court of Pardis and been charged with “disruption of public order”.

A source close to his family said that the regime’s security forces identified Maghsoudi using closed–circuit television footage and then when arresting him, beat him with electric shockers leaving deep scars on his neck.

Is Pompeo the Right Choice?