Washington Post: More than six months after the start of the Syrian uprising, Iraq is offering key moral and financial support to the country’s embattled president, undermining a central U.S. policy objective and raising fresh concerns that Iraq is drifting further into the orbit of an American arch rival — Iran. 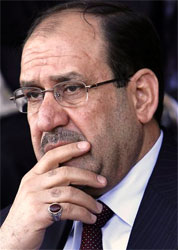 More than six months after the start of the Syrian uprising, Iraq is offering key moral and financial support to the country’s embattled president, undermining a central U.S. policy objective and raising fresh concerns that Iraq is drifting further into the orbit of an American arch rival — Iran.

Iraq’s stance has dealt an embarrassing setback to the Obama administration, which has sought to enlist Muslim allies in its campaign to isolate Syrian autocrat Bashar al-Assad. While other Arab states have downgraded ties with Assad, Iraq has moved in the opposite direction, hosting official visits by Syrians, signing pacts to expand business ties and offering political support.

After Iraq sent conflicting signals about its support for Assad last month, Iraqi Prime Minister Nouri al-Maliki spoke firmly against regime change in Syria in an interview broadcast on Iraqi television Sept. 30. “We believe that Syria will be able to overcome its crisis through reforms,” Maliki said, rejecting U.S. calls for the Syrian leader to step down. His words echoed those of Iranian President Mahmoud Ahmadinejad, who weeks earlier proposed that Syrians should “implement the necessary reforms by themselves.”

On other issues as well, the Maliki government in recent months has hewed closer to Iran’s stance — Iraq, for example, has supported Iran’s right to nuclear technology and advocated U.N. membership for Palestinians — as the U.S. military races to complete its troop withdrawal over the coming months.

“This is Iran’s influence, because preserving the Assad regime is very much in Iran’s national interest,” said David Pollock, a former adviser on Middle East policy for the State Department during the George W. Bush administration. “Iran needs Iraq’s help trying to save their ally in Damascus.”

U.S. officials acknowledged disappointment with Iraq over its dealings with Assad, while noting that other Middle East countries also have been reluctant to abandon Assad at a time when the outcome of the uprising remains uncertain.

Some of the proposed financial deals with Syria, however, “turn out to be a lot of talk,” said the official, who spoke on the condition of anonymity to candidly discuss sensitive issues.

U.S. intelligence officials predict that Syria’s uprising will eventually topple Assad, most likely after the mounting cost of sanctions causes the business elite to turn against him. But the timeline for change is far from clear.

The Obama administration hailed a decision in August by three Persian Gulf Arab states — Saudi Arabia, Kuwait and Bahrain — to recall their ambassadors to Damascus to protest Assad’s violent suppression of anti-government demonstrators. And Turkey — like Iraq, a major trading partner with Syria — has repeatedly denounced the crackdown and has established Syrian refu­gee camps and hosted meetings of opposition groups.

Iraqi leaders also have criticized Assad’s brutality, as, indeed, Iran’s Ahmadinejad has done in public remarks. But Iraqi officials have refused to call for Assad’s ouster, or accept Syrian refugees, or even offer symbolic support for the anti-Assad opposition. Instead, the Iraqis have courted trade delegations and signed pipeline deals with Syria.

“Iraq is sending a lifeline to Assad,” said Andrew Tabler, a Syria expert and author of “In the Lion’s Den,” a portrait of Syria under the autocrat.

Middle Eastern experts note that Maliki — a Shiite Muslim who lived in exile in Syria for nearly 15 years — has strategic and sectarian reasons for avoiding a direct confrontation with Assad. Members of Iraq’s Shiite majority and Syria’s ruling Alawite Shiite sect share a common worry about Sunni-led insurgencies. Some Iraqis fear that a violent overthrow of Syrian Alawites will trigger unrest across the border in Iraq.

But other experts say Iraq’s support for Syria underscores the influence of Iran, which has staked billions of dollars on ensuring Assad’s survival. Pollock, the former State Department adviser, said Iraqi leaders fear repercussions from Iran and its Syrian protege as much they covet increased revenue from trade.

“Iran is certainly important behind the scenes, and the Iraqis know the Iranians are looking over their shoulders,” said Pollock, now a researcher for the Washington Institute for Near East Policy, a think tank.

Pollock noted that Iranian-backed cleric Moqtada al-Sadr — a firebrand Iraqi Shiite with tens of thousands of devoted followers — has publicly backed Assad, calling him a “brother.” Iraqi leaders know that hostility toward Syria could invite reprisals against politicians and ordinary civilians in Baghdad, or perhaps against the estimated 1 million Iraqi refugees living in Syria, he said.

Only in mid-September, after six months of worsening violence, did the Iraqi government issue a statement that appeared to call for Assad’s ouster. In that statement, on Sept. 20, Iraqi spokesman Ali al-Moussawi was quoted as telling New York Times reporters in Baghdad that Iraq had privately urged Assad to step down. “We are against the one-party rule and the dictatorship that hasn’t allowed for free expression,” Moussawi was quoted as saying.

But less than 24 hours later, the Iraqi government began to backpedal. The same spokesman, Moussawi, told reporters on Sept. 21 that Iraqi leaders had never called for Assad’s resignation and said he had been misquoted. “It was neither the nature nor the followed discourse of the Iraqi government to intervene in the affairs of other countries,” Moussawi said.

Maliki’s broadcast interview Sept. 30 reflected a further retreat. While calling for an end to violence, the prime minister rejected regime change as destabilizing and said the crisis should be resolved gradually through reforms.

Assad has survived by relying on hard-currency reserves and Iranian loans to maintain subsidies for Syria’s military and business elites, ensuring their continued loyalty and preventing the further spread of the country’s pro-democracy uprising, which took hold in March.

Faced with international sanctions — including a new European Union ban on oil imports — Syria also has found support from Iraq and other neighbors as it scrambles to refill its hard-currency coffers, now hemorrhaging at a rate estimated at $1 billion a month.

Iraq and Syria, which share historical and cultural ties, have long been trading partners, and smuggling in border towns has generated immense profits even during times of war. Scores of private traders regularly ferry tons of diesel fuel and other goods in vans and pickup trucks, specially modified with heavy suspensions that cause their backsides to jut out like monster trucks at a car show.

Officials in both countries are cracking down on the black market in favor of legitimate ventures, particularly in the energy field. In early August, as other Arab countries were recalling their ambassadors to Syria, Iraq put on an unusual tour for 100 of Syria’s top government and business leaders. The visitors, led by Syria’s trade minister, were shown factories and refineries and applauded by Iraqis eager to cut deals with their Syrian neighbors.

The week-long visit yielded a new pact designed to boost a soaring bilateral trade that already tops $2 billion a year and will solidify Iraq’s status as Syria’s biggest trading partner. Iraqi Trade Minister Khayrullah Babakir, praising the pact, spoke of a new focus on “empowering the private sector in both countries.” There was no mention of sanctions, or of the Syrian uprising.

AFP: In a case that has provoked surprise in Iran...

AFP: Iranian security forces have been blamed for the...