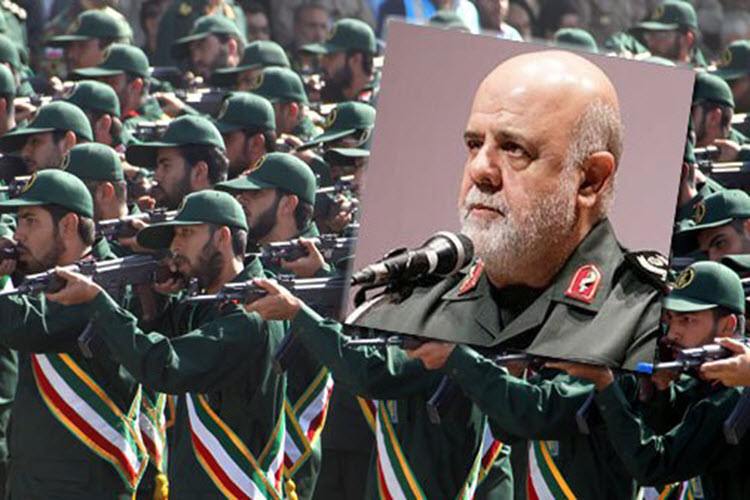 London, 26 Jan – Revolutionary Guard Brigadier General Iraj Masjedi, deputy commander of the Qods Force, has been appointed by Khamenei as the new ambassador to Iraq. Masjedi has played a key role in military operations over the past 30 years, particularly those outside Iran, chiefly in Iraq and Syria.

An article published on January 25, by the Security and Anti-Terrorism Committee of the National Council of Resistance of Iran (NCRI) addressed several disreputable issues that arose during Masjedi’s career.

These troubling incidents point to Iran’s intentions of continued meddling in Iraq:

• Masjedi was Chief of Staff of Ramadan garrison during the Iran-Iraq war, which later became the Qods Force. Masjedi said. during an interview with Mehr News Agency on June 25, 2016, “Ramadan garrison was formed during war for irregular, guerilla, special intelligence operations” and in regards to organizing and supporting Iraqi groups, that “this is exactly what the IRGC Qods Force is doing today.”

• After replacing the Ramadan garrison, the Qods Force was officially formed in 1990. Masjedi became the commander of the First Corp of the Qods Force that was responsible for military operations in Iraq. Groups such as Badr 9 Corps and Supreme Council, allegedly terrorist in nature, were under his command.

• After the invasion of Iraq in 2003, Masjedi was one of the main commanders of the Qods Force in Iraq, and traveled regularly to Baghdad and other Iraqi cities such as Nasiriyah, Basra, Amarah, Najaf and Karbala. Through Iraqi agents of the Qods force, including Hadi al-Ameri, Abu Mahdi Mohandes, Hashem al-Mousavi, Abu Bilal Adib, Hassan Alsary, etc. he advancing the occupation of Iraq.

• Many terrorist acts in Iraq, such as bombings, including the headquarters of US forces in Karbala on January 20, 2007, and the kidnapping of five British citizens in Baghdad on May 29, 2007 were said to have been carried out under the supervision of Masjedi.

• In political and military posts in Diyala Province, elements affiliated with the Qods Force were deployed, paving the way to exert pressure and repressive measures against the PMOI in Ashraf. The governor of Khalis, Uday Khedran, was one of the people who was actively involved in the mobilization and organization of mercenaries to attack Ashraf. Five rocket attacks on Camp Liberty also took place under his command, and by the affiliates of the Qods Force.

• After Maliki’s attacks on popular sit-ins in Al-Anbar province in 2013, Masjedi along with other Qods Force commanders entered Iraq and assisted with plans to massacre and to forcibly displace the Sunni population of this province.

• Masjedi was put in charge of the Iraq file in the Qods Force in March 2014. Then ambassador to Iraq, Hassan Danaifar, was working under the auspices of Masjedi. One of the tasks of Masjedi was preparation for the third round of Maliki as Prime Minister, which failed.

• Masjedi has had a major role in the formation of Hashd Al-Shabi. Masjedi’s monitored their arrival in Sunni areas, where innocent people were killed.

• Masjedi played a major role in the deployment of Iraqi militias in Syria. On January 13, 2017, the anniversary of a number of Iranian Revolutionary Guards killed in Syria, he said, “Our frontline yesterday was in the Arvand Roud (Shatt Al-Arab) and Shalamcheh and Mehran and Haj Omran. Today the frontline has been transferred to Damascus and Aleppo and Mosul and Fallujah.”

Many Iraqi political currents and many Arab countries have recognized Iraj Masjedi as a war criminal. However, Iraq’s national security adviser, Faleh al-Fayad, said that the Iraqi government agreed to the appointment of Masjedi as ambassador, and that “he has contributed to the formation of Hashd al-Shabi”

By Jubin Katiraie This report is based on statements...