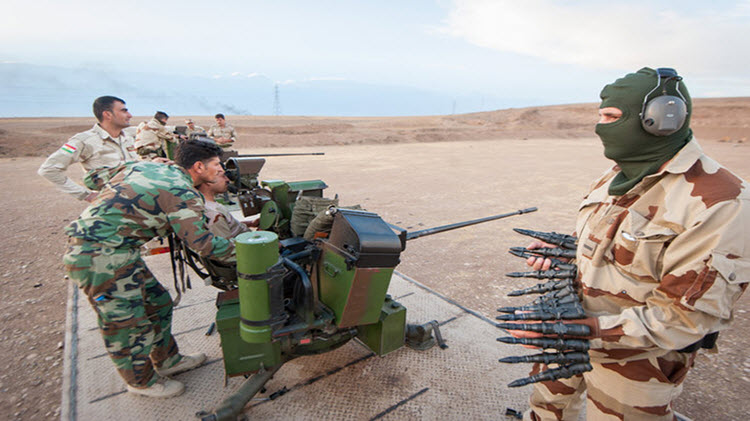 London, 18 Oct – The Kurdistan Regional Government have accused the Iranian Regime of helping the Iraqi government gain control of disputed territories in northern Iraq, including the oil-rich city of Kirkuk.

The Iraqi government forces marched into the Kurdish-controlled territories earlier this week, following weeks of threats after the Kurdish referendum. The Kurdish forces (Peshmerga) withdrew to save the lives of their people and the city and oil field were captured by Iraq in just a few hours.

Sheikh Jaafar Mustafa, the commander of Peshmerga forces in Kirkuk, said, in a statement on Monday: “Iranians were leading the battle on Kirkuk and our forces had to withdraw to protect the lives of Peshmerga. The decision [to withdraw] was not a mistake.”

The Iraqi military was joined by the Iranian-backed Popular Mobilization Forces (PMF) supposedly because the Iranian Regime wanted to punish the US for decertifying them as compliant with the nuclear deal.

The Peshmerga have received support from the US in their fight for independence previously.

Ali Akbar Velayati, the top adviser to Iran’s Supreme Leader Ayatollah Ali Khamenei, has denied this but admitted that the Iranian Regime did not support Kurdish independence. Indeed, Khamenei once called it a “plot by Zionists”.

On Tuesday, the US-led coalition spokesperson said that- based on available evidence- the Iranian Regime and its Revolutionary Guards (IRGC) did not appear to be directly involved.

However, their indirect involvement by way of the PMF is still worrying.

The Peshmerga Ministry made a statement on Monday which said that the Iraqi operation led by IRGC commander Iqbal Pur.

The statement read: “The attack, which came from the Iraqi government, the Popular Mobilization Forces, and IRGC’s Quds forces, is in retaliation to the calls for freedom by the people of Kurdistan.”

It also blamed Iran for encouraging division between the Kurdish political parties in yet another example of the Iranian Regime attempting to destabilise the Middle East.

Ammer Goli, a Hamburg-based Kurdistan affairs analyst, said that Iran has tried to increase its leverage on the Patriotic Union of Kurdistan party (PUK) while the ruling Kurdistan Democratic Party (PDK).increase relations with Turkey.

The Iranian Regime has attempted to dissuade the PUK from voting for independence and some believe that these divisions between the parties and indeed between foreign governments have only benefitted Iran.

Julian Roepcke, a Germany-based analyst with Bild newspaper, told VOA: “Tehran has been the winner of the conflicts in the region so far It is difficult to know if the Iraqi forces and its affiliated Shiite PMF militia started their attacks with a green light from Tehran, but the result seems to be in Tehran’s benefits.”

New York Times: Of all the claims that Iran...