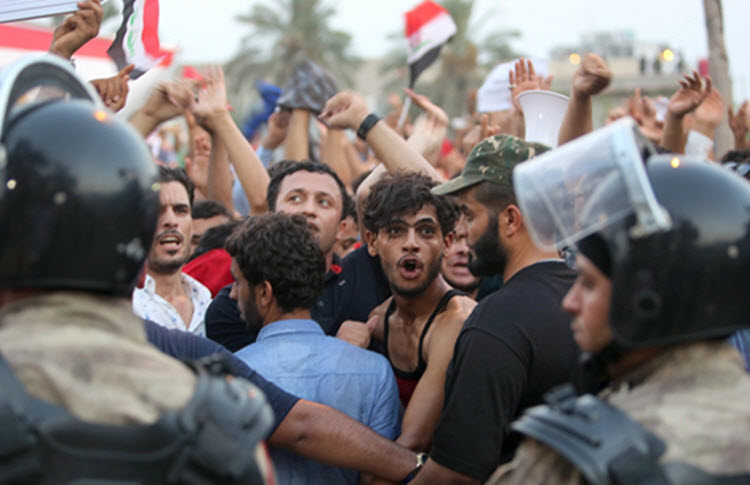 London, 23 July – Mass demonstrations are erupting all over Basra in Iraq and are spreading to the southern parts of the country and Baghdad. Protesters are threatening to obstruct oil industry and activity with major rallies.

In terms of natural resources, Basra is one of the riches cities in the world. Basra and the surrounding areas, however, are in a complete state of disarray. Aside from corruption and conflict, Iraq is suffering the effects of being ripped apart by opposing religious and political forces. The historic canals of Basra are now full of rubbish and the city’s strategic location has meant it has been trampled through by the forces that invaded the country. Basra is now rife with squatter settlements, mostly inhabited by people from rural areas trying and failing to get away from poverty. Ditches are filled with sewage.

The people of Iraq are now wondering why they should facilitate the oil extraction process when they do not benefit from it at all. They are fed up of watching the profit go straight to the pockets of the corrupt politicians in the country.

The influence and presence of Iran is what is prolonging the suffering of the Iraqi people. It has proxy groups that exert pressure in different areas. It fuels and starts conflicts and then sweeps in to gain trust and confidence. For example, Iran has provided electricity to several provinces.

However, Iran does not have the same leverage now because the U.S. sanctions are taking away resources. Iraqi officials are looking elsewhere for a more dependable supplier as Iran has now cut further power supplies.

The Iranian regime bankrolls certain paramilitaries so that conflicts continue. While this is happening, Iran profits from crime and smuggling. The people of Iraq are under no illusions with regards to Iran being the source of all problems there and the militias are loathed. The more the militias crackdown against public discontent and protesting, the more the people loath them.

During the elections in May this year, not very many people in Iraq voted. Quite simply because they know the political system cannot be fixed as it stands. Muqtada Al-Sadr must understand that the problems in Iraq cannot be fixed quickly. More importantly, it is crucial for Al-Sadr to understand that he needs to create a non-sectarian government. A unity government that must exclude the dangerous and criminal players that only have their own interests at heart. If he wants to succeed and gain popularity with the people, this is the way forward because the people really want change and they really want Iran out.

Similarly in Iran, the people are holding widespread protests. The Iranians too want great change and they know this is only possible with the overthrow of the clerical regime. Not only is the Iranian regime spreading chaos in Iraq and elsewhere in the region, but it is also destroying its own country.