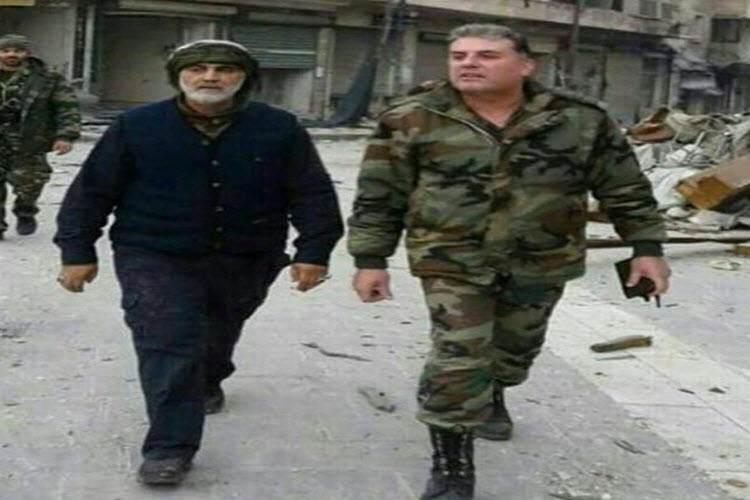 London, 20 Dec – An Iranian commander, who leads Iranian militants across the globe and is directly responsible for the death of Americans was recently photographed touring the war-torn city of Aleppo in Syria over the weekend. He was clearly in violation of a United Nations travel ban that was to be enforced under the auspices of the nuclear deal, according to multiple sources and photographs.

Iranian Quds Force Commander Qasem Soleimani, according to an article by Adam Kredo published on December 19 by The Washington Free Beacon, was touring Aleppo in a demonstration of Iran’s waxing influence in Syria and in complete disregard for international resolutions barring such behavior, as Soleimani’s presence in Syria is a direct violation of the United Nations resolution governing the nuclear deal.

His visit coincided with moves by the terror group Hezbollah, which is controlled by Iran, to establish its own claim in Syria, according to regional reports and footage. Iran’s public presence in Syria wasn’t met with action by the Obama administration, and Soleimani continues to direct Iranian forces in both Iraq and Syria and has long been sanctioned for the murder of U.S. citizens.

The Washington Free Beacon spoke with mutliple sources who disclosed that the Obama administration took a soft approach with Iran, and didn’t enforce sanctions, in an effort to preserve the nuclear deal and diplomacy with Tehran.

Iran is not worried about facing repercussions for its continued military presence in Syria in support of embattled leader Bashar al-Assad.

Soleimani’s visit to Syria is proof of this.

Iran has continued to breach international laws without facing consequences. Sanctions were not enforced on Iran when lawmakers expressed doubt about the viability of the Iran nuclear deal.

Kredo writes that the “absence of consequences for Iran’s behavior has paved the way for Hezbollah to stake it own claim in Syria, according to congressional and foreign policy insiders who told the Free Beacon that the Obama administration is working behind the scenes to prevent any new sanctions against Iran.”

A veteran insider, who consults with Congress, said about the issue, “The Obama administration has been working overtime to prevent any U.S. official from doing anything new to punish the butchers of Syria, because they know that would force them to take action against Iran, and then Iran would walk away from the deal. Now they’re ignoring even old sanctions against the Iranians. They’ll do anything to keep the Iranians in the deal for just a couple more weeks, so they can blame the inevitable collapse on Trump.”

A senior congressional aide appraised the situation as, “This administration’s refusal to enforce sanctions explicitly allowed under the nuclear deal is not only cowardice—it’s dangerous,” said the aide. “What does it say about U.S. leadership when a terrorist like General Soleimani—someone with American blood on his hands—can freely travel to the ground zero of genocide in Syria without penalty? President Obama knows his nuclear deal is on thin ice, so he’s willing overlook blatant sanctions violations like this one even if it means more carnage in Aleppo.”

A second congressional source warned that refusal to enforce sanctions was empowering Iran’s radical regime, which has increasingly involved with in Iraq, where the U.S. military has been accused of training Iranian-backed militias.

“The outgoing Obama administration struck a Faustian bargain with Iran, the world’s biggest state sponsor of terrorism, and Soleimani, head of the IRGC terrorist organization that’s responsible for the death of many hundreds of Americans, continues to do victory laps throughout the Middle East” the source said. “Unless the Trump administration changes course, this short-sighted Iran policy cannot and will not end well.”

Troops and a reporter in Aleppo, have been spotted raising Hezbollah’s flag in recent days.

Michael Rubin, a former Pentagon adviser and expert on radical regimes, told the Free Beacon that Iran sees the nuclear deal as a vehicle to advance its regional aspirations. “For Obama, diplomacy’s goal was to affirm his brilliance,” Rubin said. “For Iran’s leadership, it was an asymmetric warfare tactic meant to distract from a continuous geopolitical goal.”

“Red lines matter. Over 25 years, both Republicans and Democrats signaled to Iran about what they were,” Rubin explained. “Obama, however, believed himself wiser than Reagan, Clinton, and Bush—at least that’s what the man in the mirror told him every morning. Once Iran realized there were no real red lines, it concluded it could bust sanctions with impunity. Soleimani is the personification of that conclusion.”

Soleimani’s visit to Syria violated United Security Council resolutions government the nuclear deal, but would not lay out steps meant to address the behavior, the State Department conceded on Monday. “We do intend to consult with our partners on the security council about how to address our concerns with this,” State Department Spokesman John Kirby said during a press briefing. “We’ve long said that Iran needs to choose whether it’s going to play a positive role in helping peacefully resolve conflicts, such as in Syria, or whether it will choose to prolong them. And you’re absolutely right, his travel was a violation.”