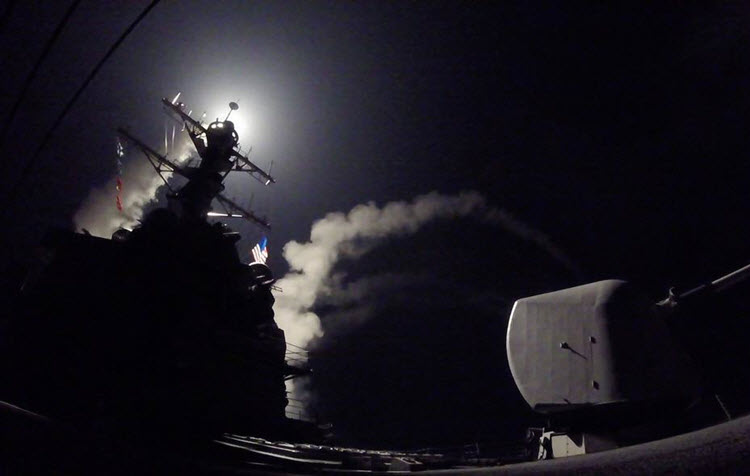 London, 11 Apr – Last week, Donald Trump ordered a strike on a Syrian air base in response to the Syrian Government’s chemical weapons attack on its civilians, which killed at least 100 people.

On Friday, April 7, Trump ordered 50 Tomahawk missiles to attack the al-Shayrat air base, which was used by the Syrian government to launch the chemical attack which injured over 400.

Turki Aldakhil, the General Manager of Al Arabiya News Channel, wrote an op-ed for Al Arabiya in he praised Trump for ending the hesitant foreign policy of the Obama administration.

He wrote: “Trump’s strike in Syria, regardless of its influence and how big or small it was, or whether it will happen again, indicates change in American behaviour when dealing with international crises, humanitarian tragedies and totalitarian regimes.”

Aldakhil also claimed that Trump’s decision represented a return to traditional American values and compared Trump to Dwight D. Eisenhower, who promised to use military action against communist countries who attacked American allies.

He wrote: “[After the attack], the usual American terms, such as maintaining national security and America’s strategic interests and defending societies against tyrants, surfaced again. The policy of intervention is part of America’s policies. Regardless of whether the US intervenes to protect its interests or to maintain global security, it is the most capable at controlling political currents considering its power and values.”

The US has intervened in many political crises throughout the years; including, Lebanon, Bosnia, Kosovo, Afghanistan, Libya, Yemen and Syria and Aldakhil claims that this was necessary to achieve peace.

Indeed, the US fought against Slobodan Milosevic and set a date for peace negotiations. Milosevic was forced to sign the Dayton Agreement on December 14, 1995.

Aldakhil wrote: “This is why top American strategists called on the US to restore the experience of the Dayton Agreement; i.e. launching war on the regime’s pillars, preventing it from easily moving, crushing its power until it submits to sitting for negotiations and concluding with a subjective political agreement that ends the tragedy of a nation, people and state.”

Aldakhil wrote: “The names of some American presidents were immortalised because they intervened at the right time to safeguard their interests and strengthen their allies. At the beginning of World War II, Theodore Roosevelt did not want to intervene. However, America’s allies France and Britain’s losses made him send them ships and ammunition.

He continued: “When more than 2,000 Americans were killed, Roosevelt announced the US will participate in the war. The majority of Americans were against this “adventurous” intervention; however, it was the most successful decision any American president had made and the allies paved their way into victory and the entire face of the world changed.”

Aldakhil concluded that this strike meant the end of the Syrian Regime.

He wrote: “The Syrian regime will not escape being held accountable and the Syrian president will, sooner or later, not be able to escape from his crimes.”

A notorious prosecutor for the Iranian regime’s Golestan Province...