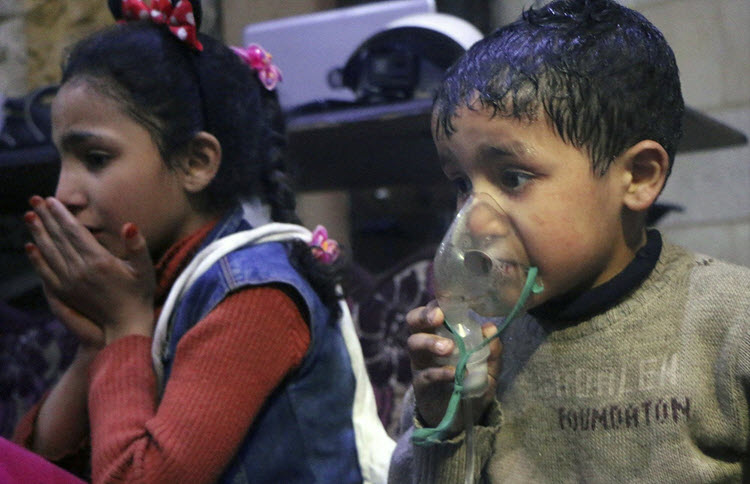 London, 10 Apr – Following the alleged chemical attack in Douma, a town in the Eastern Ghouta area of Syria, leaders and officials are calling for more action to be taken.

The Syrian government, with the assistance of Iran and Russia, is carrying out unspeakable atrocities and their actions cannot go unpunished.

Furthermore, it is the brazen nature of Syrian President Bashar al Assad and his allies Iran and Russia with regards to such cruel and inhumane attacks on civilians that is very worrying.

The chemical attack has so far not been confirmed because of the Syrian government’s refusal of access. For as long as the area is closed, it will be very difficult for confirmations to be made. However, there were images circulating on social media showing people, especially many women and children, suffocating, foaming at the mouth and struggling to breathe.

Aid workers also reported that the bodies and survivors smelled strongly of chlorine.

The Assad government has been propped up by Iran that has been present in Syria since the very beginning. If it was not for the interference and support of Iran, Bashar al Assad’s government would have been toppled years ago.

Iran has provided the Syrian dictator with significant financial aid as well as training and consultancy from its top commanders and the provision of weapons and personnel.

Syria is a major strategic centre for Iran in its ambitions for region hegemony and it is willing to go to great lengths to ensure that it does not fail.

Senator Ben Cardin, a member of the US Senate Foreign Relations Committee and a Democrat from Maryland, has called for more sanctions on Iran for its involvement in the chemical attacks. He said that he is happy President Donald Trump has taken a hard stance against Iran and Russia’s support of Bashar al Assad. Senator Cardin said: “The Syria under President Assad cannot exist without Russia’s support and the activities of Iran. The United States, the international community, need to take action against Russia and Iran for what they’re doing in Syria […] we need to take a pretty strong response for another use of chemical weapons.”

When the previous administration was in place, former President Barack Obama pushed aside his own red lines with regards to chemical weapons attacks, so it is positive that Trump is not sweeping the issue under the carpet.

When news about the attack broke, Trump strongly condemned it. On Twitter he said: “Many dead, including women and children, in mindless CHEMICAL attack in Syria. Area of atrocity is in lockdown and encircled by Syrian Army, making it completely inaccessible to outside world. President Putin, Russia and Iran are responsible for backing Animal Assad. Big price to pay. Open area immediately for medical help and verification. Another humanitarian disaster for no reason whatsoever. SICK!”

Iran is involved in conflicts across the whole region and Trump is set on curbing its threat. He has warned that the US will exit the 2015 Iran nuclear deal next month if several issues are not urgently addressed by the European signatories of the deal.

PRNewswire: In a major conference in the Parliamentary Assembly...