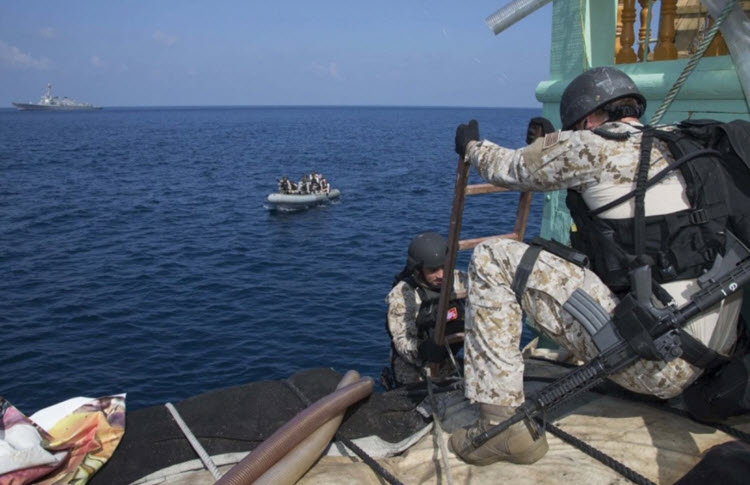 Iranian businesses that are sanctioned by the United States for links to the Revolutionary Guards Corps have been caught unloading shipments at Syria’s Latakia port, which is raising concerns that the dormant maritime trade route has been revived and could be used to smuggle weapons.

The Mediterranean Sea port of Latakia has long been used to transport illegal weapons and technologies from Iran and North Korea to Syria, but in light of increased supervision, Iran recently began transporting its military cargo, including weapons and fighters, via a civilian air route.

However, pictures shared by media show tractors made by the IRGC-affiliated Iranian Tractor Manufacturing Company (ITM) being unloaded at Latakia port. This maritime revival is likely due to the fact that Iran has suffered many failed attempts to smuggle weapons via its civilian air route, mainly thanks to hundreds of Israeli aerial bombardments on cargo terminals at Damascus Airport and other airbases in Syria.

According to intelligence sources, a recent workers’ strike at a Syrian government company factory on the outskirts of Latakia Port revealed stored machinery and materials hidden in maritime shipments. Analyst Lt. Col. Hal Kempfer said that this equipment was designated to build production facilities for Iranian precision missiles that would be used by Iran-backed Hezbollah.

At the beginning of last year, it was revealed that the ITM had signed an agreement with the Syrian Agricultural Federation (FSCA) to export equipment to Syria with the proposed aim of helping rebuild Syria’s agricultural production. But the ITM was added to the US sanctions list in October after it was discovered to be owned by the IRGC’s Basij force through two civilian front companies, Maher Aktsad and Nanjing Sahel Royal Company.

The US Treasury Department said that the Basij, which controls a wide range of business interests in Iran, had supported and financial funded the Quds Force, another IRGC arm sanctioned by the US, been involved in recruiting fighters to Iran-led Shiite militias in Syria, and trained other militias.

On Tuesday, Israel Prime Minister Benjamin Netanyahu reiterated his country’s commitment to preventing Iran from entrenching itself in Syria, which is why he had ordered hundreds of airstrikes on Iranian military facilities in Syria, including weapon convoys. He also advised that he continues to urge Russia to force Iran to remove its forces from the country.

In September, the IDF said that they had struck a Syrian military facility near Latakia “from which systems to manufacture accurate and lethal weapons were about to be transferred on behalf of Iran to Hezbollah in Lebanon”.

AP: A former British army interpreter in Afghanistan who...