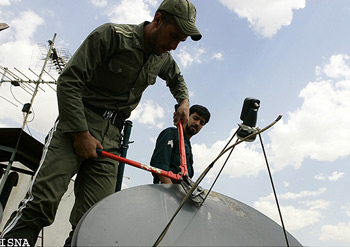 Virtually all broadcasters have been affected, including the Persian service of US-based Voice of America television and the dissident Simay-e Azadi (iranntv.com). When those channels are dialled only a blank screen appears.

Authorities have dramatically increased police patrols and searches in the capital on the anniversary of anti-government protests last summer. Men and women who walk together must carry documents proving they are closely related.

State Security Force agents routinely go up rooftops in Tehran and other major cities removing satellite dishes which are banned in Islamic Iran.

The Islamic Republic banned satellite dishes in 1995. The crackdown has been prompted by broadcasts from Iranian opposition groups whose television programs reportedly have a large audience in Iran.

Last November, the semi-official news agency ISNA quoted, Ali Darabi, Deputy Director of the State-run TV and Radio as saying, “40 percent of Iranians are now tuning in to watch satellite TV channels… The rate of satellite viewership in this society is extremely troubling”.

Rouhani’s Brother Given 5 Years in Prison for Corruption

By Pooya Stone The brother of Iranian President Hassan...

AP: Iran has rapidly ramped up production of higher-grade...