By RICHARD BOUDREAUX And ALAN CULLISON 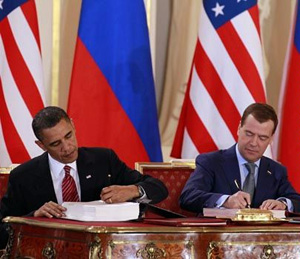 The measure brings trade rules for Russia and its companies into line with the latest round of United Nations sanctions against Iran in June, which Moscow supported. The announcement of the decree on the Kremlin’s Web site Wednesday coincided with a new offer to Iran by Russia, the U.S., the three other U.N. Security Council members and Germany to enter negotiations over its nuclear program.

The U.S. and Israel had lobbied Russia to scrap plans to fulfill its 2007 deal to supply the S-300s, which Iran could use to protect its nuclear facilities from attack. Western governments suspect that some of those facilities are involved in developing a capacity to make nuclear weapons.

In response to the lobbying, Russia had put the deal on hold but had given conflicting signals about whether it would continue a policy of restraint.

Mr. Medvedev’s decree “is a message to the Iranians that they should not wait around for the Russians to change their minds, that they should go to the negotiating table,” said Ivan Safranchuk, an analyst at the Moscow State Institute of International Relations.

He added: “There is a signal to the Americans that Russia is living up to the commitment of the reset in relations.”

Gen. Nikolai Makarov, chief of the Russian armed forces general staff, told reporters Wednesday that the military would comply with the government orders not to supply the missiles. But he declined to say whether the supply contract would be canceled permanently.

“We will see,” he said, according to Interfax news agency. “This will depend on Iran’s behavior.”