Wall Street Journal: The Mujahedin-e Khalq, Iran’s opposition group known by its initials MEK, is nothing if not well organized and funded. 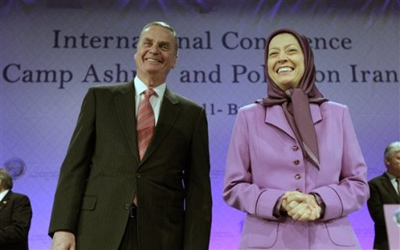 The Mujahedin-e Khalq, Iran’s opposition group known by its initials MEK, is nothing if not well organized and funded. As U.S. and EU diplomats attempt, unsuccessfully so far, to convince Tehran to abandon its nuclear armament efforts, the MEK, also known as the People’s Mojahedin Organization of Iran, has been taking an impressive road show of Iran policy experts around the world.

On Tuesday, they were in Brussels. Their message: Keep applying pressure to the mullahs’ regime, although the experts differ on how to do so.

On a rainy Tuesday in Brussels, the MEK packed a conference hall with over 1,000 enthusiastic supporters gathered to watch a panel with their heroes, an all-star cast of Iranian dissidents and foreign policy honchos, headlined by Maryam Rajavi, president-elect of the National Council of Resistance of Iran.

This despite still being labeled as a “terrorist” organization by the U.S. government, due mostly to its former ties to Saddam Hussein’s old regime.

The team included former U.S. ambassador to the UN John Bolton, former New Mexico governor Bill Richardson and former U.S. National Security Advisor director James Jones. They endorsed what one can only call a spectrum of views, although all backed MEK’s legitimacy, and the notion of removing it from the list of terrorist organizations.

“The policy of the United States must unequivocally be the overthrow of the regime in Tehran,” said Mr. Bolton, noting that “we are here to celebrate the great American tradition of disagreeing in front of a foreign audience.”

Mr. Richardson advocated expanding the scope of sanctions against Iran, with “the military option” only as a last resort.

It was Mr. Bolton who drew the standing ovation.

IAEA denies report it is sure Iran is seeking bomb

AFP: The UN atomic watchdog said Thursday it has...