Reuters: Britain began evacuating diplomatic staff from Iran on Wednesday and warned of serious consquences for the Iranian government, one day after protesters stormed the British Embassy in the most violent incident yet as relations rapidly deteriorate. 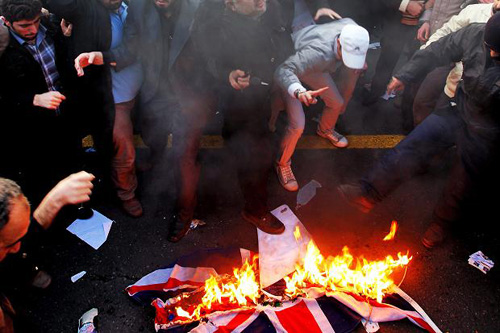 TEHRAN, Nov 30 (Reuters) – Britain began evacuating diplomatic staff from Iran on Wednesday and warned of serious consquences for the Iranian government, one day after protesters stormed the British Embassy in the most violent incident yet as relations rapidly deteriorate.

Britain said it was “outraged” over the attack and the ransacking of diplomatic premises by hardline students and Basij militia in revenge for new British and Western sanctions on Iran over its nuclear programme.

The attack also reflected widening divisions within Iran’s ruling elite over how to deal with the increased international pressure as sanctions take their toll on the already stagnant economy.

The protest, which evoked memories of the 1979 takeover of the U.S. Embassy, appeared to be a move by the conservatives who dominate parliament in their feud with President Mahmoud Ahmadinejad and designed to force him to heed their demand to expel the British ambassador.

In their dispute with the West, Ahmadinejad and his ministers have shown no willingness to compromise on their refusal to halt Iran’s nuclear programme but have sought to keep talks open to limit what sanctions are imposed. The West believes the programme is aimed at building a nuclear weapon, which Tehran denies.

“It was planned and organised by the students but it was not something that came from the government,” said Mohammad Marandi, an associate professor at Tehran University.

“The students were telling me days before that they were planning to be there in large numbers. They said some students would try (to storm the embassy),” he said. “I don’t think the government is happy with what happened.”

The daily Vatan-e Emrouz declared “Fox’s den seized” –referring to Britain’s nickname “the old fox” which reflects a widely held view in Iran that the former imperial power still wields great power behind the scenes in Iranian and international affairs.

While Iranian police at first did not stop the protesters storming the embassy gates, they later fired tear-gas to disperse them and freed six Britons held by demonstrators.

Iran’s Foreign Ministry expressed its regret for the “unacceptable behaviour of few demonstrators”.

The protesters hit back at the Foreign Ministry and police.

“The Foreign Ministry stance on the university students’ move has surprised us because our expectation from the Foreign Ministry is not to sacrifice the basis and the goals of the nation for diplomatic and political relations,” said a statement by a group calling itself the Islamic community of seven Tehran universities.

“While the protesting students were seeking to answer to the plots and malevolence of this old fox in support of the decision of the revolutionary parliament to expel the ambassador of the British government we witnessed the harsh blow of the police on these students,” said the statement on a state TV website.

“We expected the police to be on the side of the students instead of confronting them.”

Britain last week banned all its financial institutions from any dealings with Iran, including its central bank, after a report by the U.N.’s International Atomic Energy Agency suggested Iran may have worked on developing a nuclear arsenal.

Iran, the world’s fifth biggest oil exporter, denies the charge and says it only wants to generate electricity.

The United States and Canada also tightened their sanctions on Iran last week but France is pressing for more.

“France is advocating sanctions on a scale that would paralyse the regime: freezing of central bank assets and an embargo on hydrocarbon exports,” French Foreign Minister Alain Juppe said in an interview in a weekly news magazine.

Seemingly alluding to efforts to agree such a move at the level of the 27-country European Union, Juppe said: “We want to reach a common position so that the pressure will be utmost. We cannot keep letting the Iranians take us for a ride.”

Perhaps mindful of the 1979 seizure of the U.S. embassy in Tehran when radical students held 52 Americans hostage for 444 days, Britain has yet to announce what measures it will take against Iran over the storming of its premises. According to Western diplomats, its two dozen diplomatic staff and dependents are still in the process of being evacuated.

British Prime Minister David Cameron chaired two meetings of the government’s crisis committee on Tuesday night and again on Wednesday morning to discuss the situation and a response, a British spokesman said.

British Foreign Minister William Hague is due to address parliament on the incident later on Wednesday.

Protesters stormed the main British embassy in downtown Tehran on Tuesday, smashing windows, torching a car and burning the British flag. At the same time, another group broke into a British diplomatic residential compound at Qolhak in north Tehran which used to be the embassy’s summer quarters.

Several sources told Reuters that diplomats had had their movements restricted by protesters and one said staff in the main British embassy had been herded into a room while protesters ransacked the premises.

Both properties were severely damaged, with official and personal possessions looted or destroyed, said sources who had spoken to embassy staff. One described the scene as “carnage”. (Additional reporting by Hossein Jaseb and Mitra Amiri in Tehran, Keith Weir in London and Parisa Hafezi in Istanbul; Writing by Jon Hemming)

AFP: Iran's judiciary has charged an aide to Nobel...