Group strives for a safe and prosperous Iran

Albuquerque Journal: This annual conference is the largest political event of the Iranian people in opposition to the ruling religious dictatorship in Iran. Hosted by the National Council of Resistance of Iran, or NCRI, over 100,000 Iranians, world leaders and elected officials come together singing the same tune of democracy, human rights and free and fair elections. Albuquerque Journal 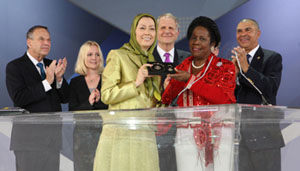 The Albuquerque Journal recently published a story about former Gov. Bill Richardson’s travel to Paris to attend the event “Onward to Freedom.”

This annual conference is the largest political event of the Iranian people in opposition to the ruling religious dictatorship in Iran. Hosted by the National Council of Resistance of Iran, or NCRI, over 100,000 Iranians, world leaders and elected officials come together singing the same tune of democracy, human rights and free and fair elections.

In recent years, the NCRI has gathered support and public backing from the European Union, European Parliament, the Canadian government and a long list of current and former high ranking U.S. officials.

As a proud supporter of the NCRI, a New Mexican and a longtime Albuquerque resident, it is important to note the many accomplishments the organization and its sister group the MEK have attained over the last several years.

NCRI has been instrumental in revealing secrets on Iran’s nuclear program, including the 2002 announcement of a uranium enrichment facility in Natanz and a heavy water facility at Arak. In 2010, the organization released evidence of another nuclear facility west of Iran’s capital, Tehran.

Just last week NCRI announced the existence of a previously unknown underground nuclear site under construction in Iran. This revelation was covered widely in the western press including Fox News, The Chicago Tribune and Reuters.

In addition to releasing inside information on Iran’s nuclear policy, NCRI has been influential in advocating for a variety of human rights issues, exposing the true nature of Iran’s President-elect Hassan Rowhani, and has become a global leader on news from inside Iran such as the recent resumption of public executions.

Contrary to the Journal’s description, NCRI is not a terrorist organization but is comprised of 25 committees that are responsible for expert research and planning for a future democratic Iran.

The 25 committees range on topics from women’s rights to security and anti-terrorism.

At the head of the organization is President-elect Maryam Rajavi, who aggressively promotes a Ten Point Plan for the future Iran.

The plan calls for basic liberties that we as Americans take for granted in our daily lives; liberties such as free elections, separation of religion and state, gender equality and recognition of private property, private investment and market economy.

These are all non-existent in Iran today.

As a proud Iranian-American I long for the day when I can travel to my home country freely and see prosperity and not destruction.

I hope that one day my children and grandchildren will be proud of their heritage and celebrate the millions of Iranians living outside of Iran who have worked for decades in support of democracy.

Being active in NCRI allows me to have faith that change will occur in Iran and the change will come sooner than later.

By Jubin Katiraie As the Iranian government achieves more failures...