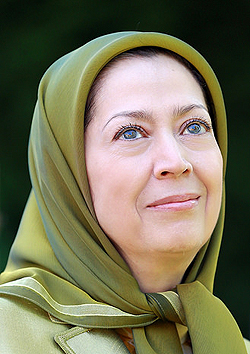 The West’s appeasement of Iran during the nuclear talks is ‘giving legitimacy’ to an illegitimate regime, Iranian Resistance leader Maryam Rajavi has declared.

She said circumstances were ‘ripe for regime change’ but the US and other Western governments were standing in the way by pursuing a deal to halt Iran’s efforts to acquire a nuclear bomb.

She told the Washington Times newspaper: “Through their policy of appeasement and giving concessions to the regime, Western governments have served as an obstacle to the regime’s overthrow.

“In the absence of Western assistance, this regime would have fallen by now.”

Mrs Rajavi made the remarks ahead of a major rally of Iranian dissidents in Paris on Saturday, where she said she will be delivering a ‘simple but aggressive message’: “The religious dictatorship ruling Iran — which is based on the doctrine of velayat-e faqih, or ‘absolute clerical rule’ — serves as the stimulus and epicenter of the menace of fundamentalism masquerading as Islam in the region and the rest of the world.

“Western governments, especially the US, have made a mistake by drawing a distinction between Shiite fundamentalism and Sunni fundamentalism and thinking that Shiite Iran can be trusted to confront the recent rise of Sunni extremism in Syria, Iraq and Libya.”

US attempts to strike a nuclear deal with Iran do nothing but enable Tehran’s continued oppression of the Iranian populace, Mrs Rajavi said.

She added: “The main objective of fundamentalism is to establish an Islamic Caliphate and to implement Sharia law by force. This phenomenon does not recognize any borders and its Shiite and Sunni variants are essentially cut from the same cloth.

“The failure to prevent the Iranian regime’s meddling in Iraq after the 2003 Iraq War, which morphed into the gradual occupation of Iraq by the Iranian regime, gave an unprecedented boost to the growth of fundamentalism.

“Similarly, the regime’s crimes in Syria and Iraq and the genocide against Sunnis, which is accompanied by Western silence, have enabled the rise of the Islamic State.”

Sunday Times: Al-Qaeda leaders in Iraq are planning the...