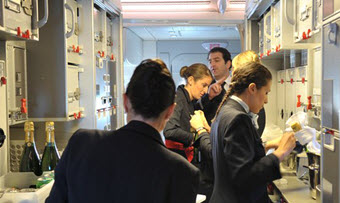 London, 6 Apr – Air France has said that it will allow female staff, cabin crew and pilots, to opt out of flying routes to Tehran. The news comes after some staff said they did not want to be forced to cover their hair whilst in the country.

Air France is part of the Franco-Dutch group Air-France-KLM. The group is preparing to restart flights to Tehran following a period of sanction lasting eight years. A meeting between Air France management and union representatives on Monday made the agreement possible, Reuters reported.

Iranian law states that women must cover their hair when in public. The debate surrounding public display of religious symbols, such as the headscarf, is a contentious issue in France which puts great importance on the separation of church and state. Other parts of the uniform demanded by Tehran include long-sleeved jacket and trousers rather than the typical dress. (NCRI)

Air France-KLM plan to restart on 17 April, British Airways will be restarting flights from Heathrow to Iran on 14 July. The airline said it would make recommendations and decisions nearer the time. Lufthansa of Germany continued to fly to Tehran throughout the sanction period, but said it had not experienced any problems and crew followed local laws whilst there.

The flights from Paris to Tehran will be operated on Airbus A330 and A340 with crews consisting of two pilots and eight (A330) or 10 (A340) flight attendants. The route will run three times during the week, Air France has had a presence in the region since 1946.

Iran to send aid to Gaza via Egypt: report

AFP: Iran plans to send aid to the beleaguered...

AP: A retired University of Tennessee professor accused of...