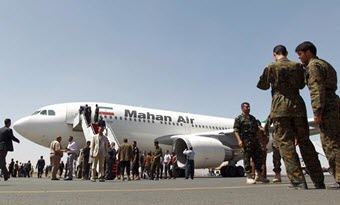 London, 6 Apr – Saudi Arabia has suspended licenses that were granted to the Iranian airline Mahan Air, preventing it from using Saudi airspace and from landing at airports in the country. The General Authority of Civil Aviation stated on Monday that this was due to violations of local safety rules.

In January somewhere in the region of 150 flights between Iran and Saudi Arabia had been halted after diplomatic relations between the countries were cut.

The GACA made a statement that Mahan Air had violated airline safety agreements “prompting the suspension of licenses granted to the company”, Reuters reported. The airline was founded in 1991 and operates both domestic and international flights. In 2011 the US Department of Treasury designated Mahan Air as a material and transportation supporter of terrorism, citing links to the Islamic Revolutionary Guards Corps-Qods Force (IRGC-QF). The US has imposed sanctions on Mahan Air three times since 2011 for its involvement with the Syrian government, the IRGC and Hezbollah.

Relations between Iran and Saudi Arabia have become increasingly fraught, with proxy wars being fought throughout the region putting the two states into indirect conflict with one another. The Saudi government severed ties with Iran after the ransacking of the Saudi embassy in Tehran in January.

On 7 January tensions were increased further as Iran claimed Saudi warplanes had targeted its embassy in the Yemeni city of Sanaa. Despite these claims by Tehran, local residents and the BBC have reported that the embassy was not visibly damaged.

UPI: Fixing the Iranian economy is moving to the...