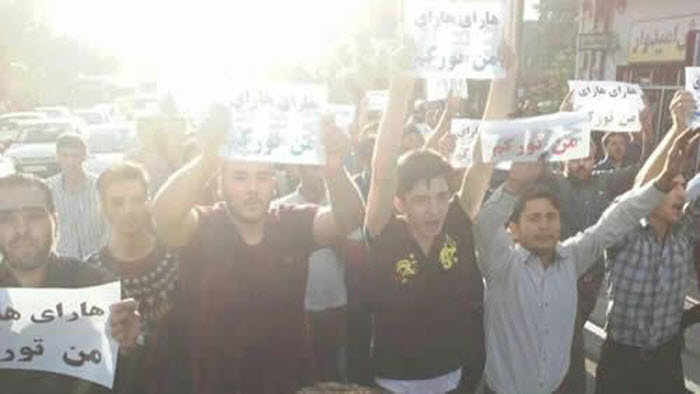 London, 30 Jul – The National Council for Resistance of Iran (NCRI) reported on Thursday demonstrations in Tehran in Toopkhaneh Square as thousands of Iranian Turks (Azeris) protested the disparagement of Azeris by state media.

Thousands of angry protesters in Orumiyeh, north-west Iran, were attacked by state security forces (SSF) anti-riot units who shot plastic bullets to the crowd. In Tabriz, marchers expressed their disgust for the repressive policies of the clerical regime, who have repeatedly insulted Iran’s Turks. Here also, SSF agents and anti-riot units attacked the crowd, beating and injuring many.

Several people were arrested in Orumiyeh, Tabriz, Zanjan and Maragheh. Information is not yet available regarding the fates of those arrested in other demonstrations on Tuesday, in Orumiyeh and Tabriz.

Orumiyeh’s Governor claimed that the demonstrations were illegal and ordered security forces to deal with the people of Azerbaijan.

Discrimination of ethnic and religious minorities is growing, and the regime refuses to respond to the just demands of the populace. These prejudicial conditions in Iran can be ended only by the overthrow of Iran’s clerical regime.

The NCRI called for solidarity with the people of Iranian Azerbaijan and protests against the policies of the ruling regime against ethnic and religious minorities.

“Confessions made by Qassem Musleh al-Khafaji, one of commanders...