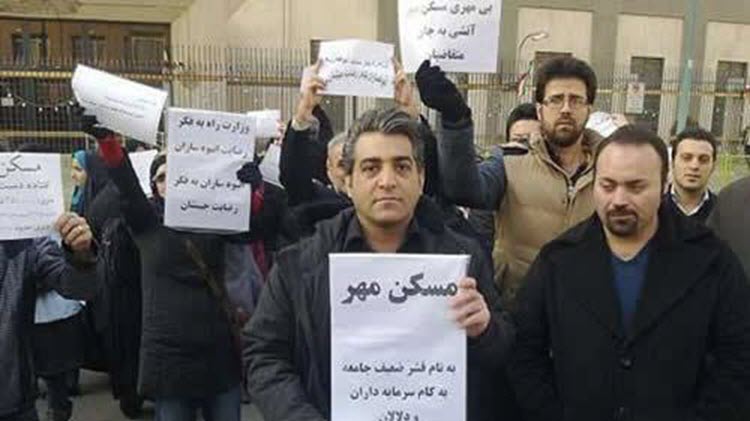 London, 1 October –  On Thursday, September 29, The National Council of Resistance of Iran (NCRI)reported on several rallies, including retired teachers,housing applicants and petrochemical workers.

Protestingtheir poor living conditions and low pensions, several hundred retired teachers gathered at the rally in Tehran, in front of the regime’s parliament, on the morning of Tuesday September 27, according to ILNA news agency.  Some reports stated that the number of the protesters reached 2000.  At the same time, retired teachers held rallies in several other cities, including Kermanshah, Mashhad and Tabriz. The retired teaches have held several gatherings this week in protest of their poor living conditions.

Additionally, on September 25, according to “Fars” state news agency, Mehr Pardis Housing applicants gathered in front of The Ministry of Roads to protest the non-delivery of housing units on time, andthe increase of the designated payments.  One of the Pardis applicants stated, “Our units were supposed to be delivered in 18 months, whereas they’ve not only not yet been delivered but their prices have been raised as well.” He added, “with three children, I’m not able to provide 30 million toman cash.”

Pardis Petrochemical workers staged a hunger strike to protest against mandatory work shifts.  On September 27, ILNA news agency quoted the protesting workers, “At the beginning of September, the employer has required the Four Work Shifts Scheme to be implemented, while implicitly talking about the possibility of cutting off or reducing cooperation with the workers who are opposed to work shifts.”

Among the workers’ main issues arereduced wages, change in the work shift (thus having less time to spend with family), and their being forced to settle in the area with rising cost of rents.

AFP: A ship loaded with rockets and explosives which...

AP: Iranians traveling to Israel could go to prison...