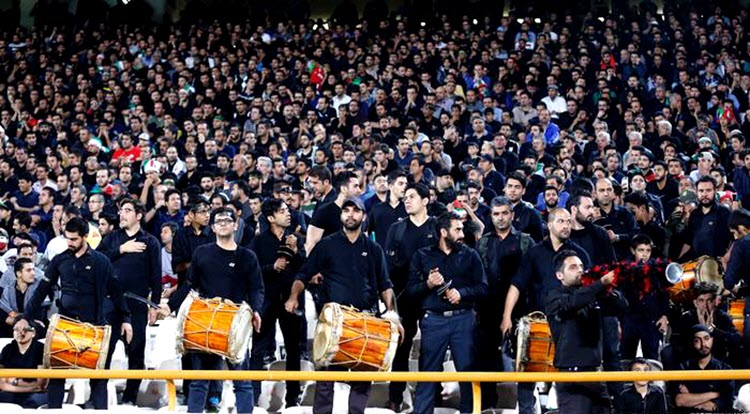 London, 7 November – On Friday, the BBC reported that FIFA, soccer’s international governing body, had imposed a fine of 37,000 pounds (or about 46,000 US dollars) on the Islamic Republic of Iran over its match against South Korea last month. The match made headlines at the time because it coincided with the Shiite Islamic holiday of Ashura, marking the martyrdom of Imam Hussein. The coincidence led to criticism by Iranian clerics, because the expression of joy is considered forbidden during the two holy days. But the country’s authorities worked around this situation by imposing guidelines on attendees at the game, ordering both Iranians and foreign visitors to refrain from cheering or applauding.

Instead of such expressions, attendees were encouraged to shout slogans of praise for Hussein, although such religious content at international games is understood to be a violation of FIFA’s rules. The 46,000 dollar fine related both to these slogans and to banners that the Iranian authorities had placed at Azadi Stadium to mark the occasion of Ashura. However, last month’s reports indicated that these violations had been discussed ahead of time, and that the Iranians had agreed up-front to the payment of the fine, in order to resolve the perceived contradiction between the sports scheduling and the country’s mandatory religious commitments.

Because the current situation reflects a mutual arrangement, the report is certain to be regarded as quite different from other potential topics of confrontation between FIFA and the Islamic Republic. The soccer authority has long been under pressure from international human rights organizations to impose restrictions on Iran over its ban on the presence of women at sporting events inside the country. Similar pressure has been exerted on the International Volleyball Federation (FIVB). And in related stories, an American female chess champion and an Indian female target shooter both recently announced personal boycotts of international events in Iran, in protest against mandatory veiling laws for women.

Despite these personal protests and the actions of various human rights groups, FIVB and FIFA have shown reticence about actually holding Iran to account for its gender segregation, which violates the international standards of both organizations. Previous volleyball tournaments have seen supposed agreements between Iran and the FIVB to allow women into designated sections of the relevant venues. But in practice, even these minor reforms have not been carried out. Yet neither FIVB nor FIFA have taken the steps advocated by various protestors, to bar Iran from hosting international tournaments until it changes its policies.

The fine for religious expressions may indicate that the international community and particularly its European entities are interested in engaging with Iran through negotiating processes, but are disinclined to exert pressure when those negotiations do result in meaningful change. This is certainly something for which those entities have been criticized by human rights advocates, who tend to see Western governments as neglecting not only the issue of the stadium bans but also a range of other human rights issues.

Those criticisms specify that the leaderships of the US and Europe have been excessively focused on nuclear negotiations and subsequently on the prospect of improved trade relations with Iran, and have placed human rights on the back burner as a result. These arguments are buttressed by the accumulation of indicators that European governments and companies are intensely interested in potential Iranian investments, regardless of the persistence of Iranian misbehavior and anti-Western rhetoric.

It was previously pointed to Greek dissent over the continued enforcement of EU sanctions as one example of this trend. And on Friday, the Daily Mail pointed out that the United Kingdom had similarly courted the wrath of the EU through its own dissent over the speed of economic reengagement with Iran. Despite its population having voted to exit, the UK is set to remain a member of the EU at least until 2019 and as such is barred from pursuing separate economic agreements with foreign entities like Iran.

But the Daily Mail report indicates that British Trade Secretary Liam Fox has generated lists of foreign powers with which to engage in bilateral trade talks during the two-year Brexit process. Iran reportedly has a place of prominence in these lists, and Fox told attendees at a London financial conference, that “slowly but with increasing enthusiasm, British companies are starting to do business with Iran again.”

This is certainly welcome news to some other Western policymakers, but not to others. And there is a particularly clear divide between opinions in the US, which has simultaneously been accused of pushing too eagerly for European investments in Iran and of keeping obstacles in place to make those investments more difficult. Multiple reports on Friday suggested that there is substance to both of these accusations, as different organs of the Obama administration compete to either encourage Europeans to invest in Iran or warn them against doing so.

Mosaic Magazine reports that the State Department has felt compelled to correct its own chief official, Secretary of State John Kerry, over claims that European firms would face no problems if they maintained ordinary procedures of “due diligence.” The article also quoted former US diplomat Elliott Abrams as saying that Kerry’s supposedly “bad advice” to European banks is aimed at convincing the West to “bend over backwards” in order to help the Iranian economy.

According to the Weekly Standard, the State Department’s commentary on the current investment environment contradicted Kerry by saying that banks would remain at risk of penalties under existing US sanctions if they did not maintain “enhanced levels of due diligence” in their dealings with Iran. While all nuclear-related sanctions were lifted from Iran as a result of the Joint Comprehensive Plan of Action, the nuclear agreement does not address sanctions related to human rights abuses and Iran’s support for terrorism, which remain in place.

The Weekly Standard quoted Illinois Senator Mark Kirk as saying, “It’s highly irresponsible for Kerry to try and get the world to treat the Iranian regime like it’s a normal non-terrorist government when even his own State Department still describes Iran as the biggest state sponsor of terrorism in the world.”

Furthermore, this sponsorship of terrorism influences the Treasury Department’s consistent position that the Iranian financial system is a subject of “primary money laundering concern.” And Mosaic points out that it is the Treasury, and not the Department of State, that is in charge of sanctions enforcement.

Kerry’s commentary arguably reflects similar attitudes toward Iran’s financial activities as FIFA and FIVB hold toward its violation of international sporting standards. That is to say, certain figures in the Obama administration have been eager to engage directly with the Islamic Republic, but not to renew pressure on it when that engagement fails to result in changes in behavior.

The current US-led sanctions against Iran relate in large part to the aforementioned money launder concerns, which Iran has not addressed in a way that would bring it into line with universal banking standards. In fact, instead of addressing these points of concern and providing international banks with signs of compliance, the Iranian leadership has repeatedly accused the US of violating the spirit of the JCPOA by continuing to enforce those standards.

These talking points reflect an overall increase in anti-Western rhetoric in the wake of the nuclear agreement. That rhetoric surged again this week as the Islamic Republic marked the anniversary of the beginning of the 1979 Iran Hostage Crisis. EA WorldView reported upon aspects of those celebrations and pointed out that Friday prayer leader Ayatollah Movahedi Kermani had reiterated the regime’s resistance to further negotiations with the US.

Also during the celebration of what the Iranian regime calls “National Day Against the Global Arrogance,” Iranian Revolutionary Guard Corps Deputy Commander Hossein Salami suggested that Iran might walk away from the nuclear agreement and ramp up its uranium enrichment activities if the US does not do more to facilitate Iran’s economic recovery and reintegration into global markets.

But in spite of these threats, various recent moves by European governments and businesses suggest that the international community as a whole is not prepared to pressure Iran over its own compliance while waiting for the lifting of American-made obstacles to investment.

US ambassador says more talks possible with Iran on Iraq

AP: The Bush administration issued a warning Tuesday to...