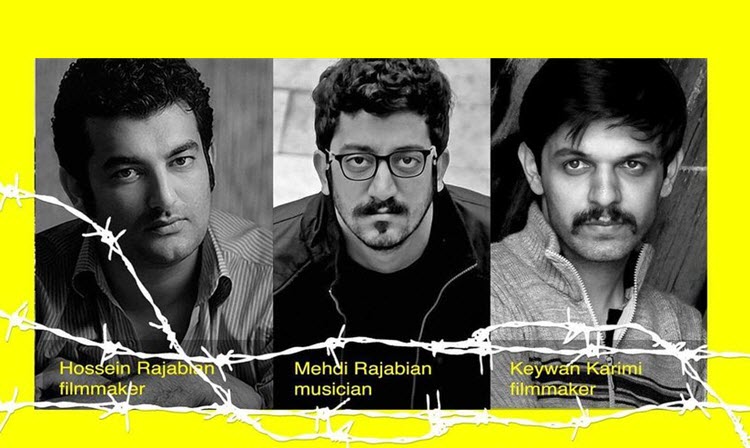 London, 9 November – The Iranian regime is infamous for its treatment of artists, creatives, and activists – and it’s never been one to advocate freedom of expression. Many artists and activists remain in captivity in Tehran’s prisons. Powerless and robbed of their basic freedoms, some opt to go on a hunger strike as their last resort to fight the regime and the injustice. Two brothers – a filmmaker Hossein Rajabian and a musician Mehdi Rajabian – have been on a hunger strike since October, as they live their days as captives in Tehran’s infamous Evin Prison.

In a response, a large campaign has been launched by Amnesty International and a band called Kiosk, to call on the regime to immediately release the artists who have been jailed. They invite anyone from across the world to join the campaign #FreeArtists to express their support.

Numerous artists and activists are held captive in Iran’s prisons today, most sentenced following unfair allegations and unjust trials, as in the case of the Rajabian brothers.

In 2015, the Rajabian brothers were summoned to court, where they were accused of “insulting Islamic sanctities” and “illegal audio-visual activities” and sentenced to three years in prison, following an excessively unfair trial. They have been on their second hunger strike since October, protesting their unjust punishment. Their stance is serious. They have announced that they will refuse being forced intravenous drips until their release day.

“Expressing yourself through art is not a crime and it is outrageous that the Iranian authorities have resorted to locking up artists and musicians simply for their artistic work,” Philip Luther, Director for the Middle East and North Africa at Amnesty International, said. “Mehdi and Hossein Rajabian are prisoners of conscience who shouldn’t be forced to spend a single minute behind bars,” he added. “The Iranian authorities must order their immediate and unconditional release.”

As well as demanding their release, Amnesty International have demanded that the two brothers are given access to adequate healthcare. Their health is deteriorating because of the brutal treatment they are facing in prison. Mehdi Rajabian reported to have been punched in the stomach by a doctor at the prison and has since coughed up blood on two occasions.

Mr. Luther went on to comment on the state of artistic suppression in Iran, and how that goes against basic human rights to freedom.

“Their imprisonment is yet another nail in the coffin for freedom of expression in Iran. The human right to liberty is sadly so undervalued by the Iranian authorities that they are prepared to condemn individuals to years in jail just to silence artistic voices that they deem as ‘anti-Islamic’ and ‘anti-revolutionary’,” Mr. Luther said.

Keywan Karimi, another artist, was trialed for similar allegations, namely “insulting Islamic sanctities” for his work, and is facing a sentence of six years in prison.

Join the #FreeArtists campaign today to show your support, or find more information on the Amnesty International web pages.

Banned art in a show of revolt against mullahs

The Sunday Times: A collection of art including works...

Reuters: Iran will sign a contract with Pakisan next...