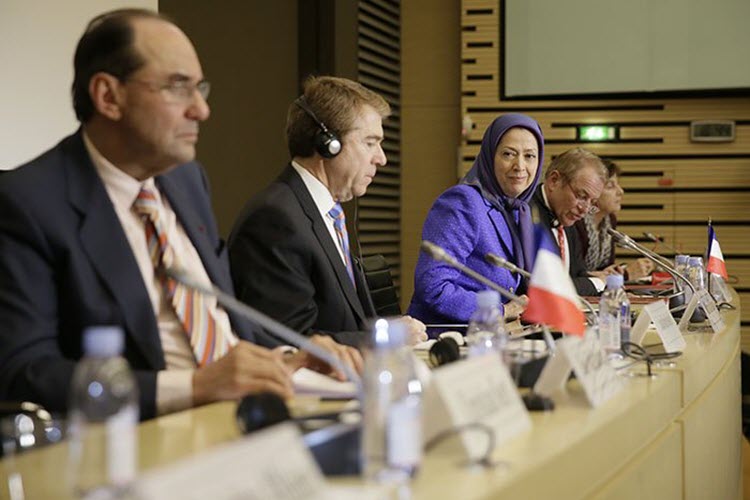 London, 19 Jan – Maryam Rajavi, the distinguished leader of the Iranian Resistance, addressed the French Parliament over the threat that the mullahs’ Regime still poses to the middle east, on Tuesday, January 17.

She noted that the death of former Iranian President Rafsanjani, the Regime became imminently more fragile, and in response, would become more defensive and more extreme. They will up their terrorist activities, their oppression of their own people and their quest for a nuclear bomb in the coming months.

Rajavi made it clear that the only way to achieve peace in the middle east is through decisive action by Europe and America against the Iranian Regime.

She said: “In light of the failure of the policy of appeasement, there is a great need for policy change to end the suffering of the people of Syria, their displacement, and homelessness. Showing firmness vis-à-vis the terrorist operations of the Iranian Revolutionary Guards Corps and its destructive role in the region is a prerequisite to peace and tranquillity in the region and the world.”

Rajavi called on France to start in motion the expulsion of the Iranian Revolutionary Guards Corps (IRGC) and its militias from Syria and Iraq.

She said: “The world has now learned that the Iranian mullahs’ regime, the IRGC, the Hezbollah, and their other mercenary militia in Syria do not seek to fight the Daesh (ISIS) and extremism but are there to save the dictator of Damascus.”

Rajavi quoted the supreme leader Khamenei, who said that if Iran had not ploughed its resource into propping up theSyrian Regime, they would have had to face their own opposition forces in Iran.

She said: “There will be no political solution as long as the Revolutionary Guards and their militia are on the Syrian soil. So, if we want peace, we must start with expelling the Iranian regime from Syria. The main loser of a ceasefire and peace in Syria is the Iranian regime.”

She encouraged all Western Governments to talk to the Iranian Resistance -not the Regime- if they wanted to achieve peace in the middle east. This has not recently been the policy of the West, as they sought appeasement of the oppressors, rather than the oppressed.

Rajavi continued:  “The Iranian regime has invested in the West’s inaction and appeasement to export its extremism under the banner of Islam, a policy that has taken up catastrophic dimensions since the start of the war in Iraq in 2003. As some distinguished political personalities in the US and Europe have consistently demanded, I urge decisiveness against the religious fascist regime ruling Iran. I urge political leaders in the European Union and the US to not count on the clerical regime in Tehran. That regime belongs to the past.”

Rajavi also took the time to celebrate the achievements of the Iranian Resistance in the past year, including the safe relocation of Iranian dissidents to Europe and the growing number of people protesting the barbaric Regime.

She said: “[In 2016] the Iranian Resistance managed to relocate all the residents of Camp Liberty to Europe and particularly to Albania. I would like to express my gratitude to the Parliamentary Committee for A Democratic Iran and all members of parliament who took part in this campaign. The resettlement of such a large number of people has imposed a tremendous financial burden on the Iranian Resistance, particularly for the treatment of the ill and wounded who were deprived of medical care for a long time.”

Rajavi continued: “The weakening of the Velayat-e Faqih regime is heartwarming to our people. Political prisoners have become more active in sending out their messages and the social media echo them extensively. The families of the victims have challenged the regime by holding its officials accountable for their crimes, particularly the massacre of 30,000 political prisoners in 1988. The people of Iran demand an end to executions and an end to dictatorship in Iran.”

The Times: The former US commander in Iraq is...

By Jubin Katiraie The Iranian regime’s slogan over the...