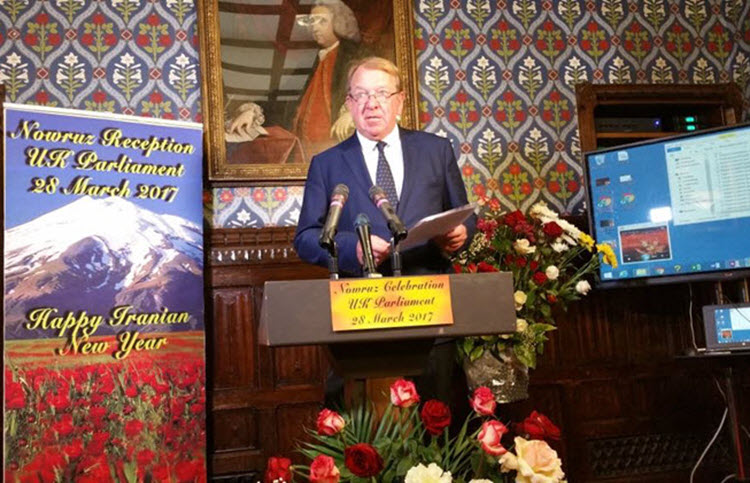 London, 30 Mar – President of the European Iraqi Freedom Association (EIFA), Struan Stevenson, spoke in the House of Commons in the UK on Tuesday 28th March, for the Persian New Year – Nowruz.

He said that Nowruz is an opportunity for an end to conflict and the beginning of a peaceful and free society.

“We are all one humankind and we must all strive to end conflict and to live in a society where peace and freedom are the guiding principles; a society where Shi’ites, Sunnis, Christians, Jews and people of all religions and none, can live in harmony; a society where religion and the state are separate entities and where justice is fair and free from political influence.”

He highlighted that this was not the case for 80 million Iranian people who endure “repression, cruelty, injustice, torture, corruption and the export of terror” because of the mullahs’ Velayat-e Faqih regime. Stevenson called it an “outrage” and a “disgrace” that this is done in the name of Islam.

“Let us pray that this Nowruz will bring the blossoming of a new and better future for Iran and an end to the years of suffering under the tyrannical dictatorship of the theocratic fascists.”

Stevenson said that the EIFA released a report detailing the crimes of the Revolutionary Guards (IRGC) and has called for it to be listed as a terrorist organisation. He said that the IRGC has been carrying out terrorist activities and domestic suppression for decades.

He mentioned in particular the horrifying scenes of bloodshed in Syria where Iran is propping up dictator Assad. The rise of Daesh, he said, is a direct result of Iran’s support to Assad and to the former Iraqi Prime Minister Nouri al-Maliki. “So it was thanks to Tehran that ISIS grew and became a threat to the whole world, creating the largest refugee crisis in modern history.”

Stevenson believes that designating the IRGC should have happened a long time ago and is the most essential step to curb Iran’s “atrocities”.

Mentioning the corruption in the government, Stevenson said: “The ‘smiling’, Rouhani is in charge of a venally corrupt government, which has executed over 3000 people since he took office in 2013. Rouhani’s government, under the ultimate control of Supreme Leader Ayatollah Ali Khamenei, condones torture and arbitrary imprisonment, discriminates against women and encourages public floggings, eye-gouging, amputations and hanging as a means of terrorizing its own population into docile submission.”

He criticised the EU’s High representative for Foreign Affairs & Security, Federica Mogherini, for her silence faced with these atrocities. He said she should be condemning the country for its blatant abuses of human rights.

“The West should be entering into dialogue with the political coalition that is the NCRI, rather than pussyfooting around with the mullahs in Tehran. The NCRI under the inspiring leadership of Mrs Maryam Rajavi, offers the best possible hope for peace and stability in the region.”

“I firmly believe that the only solution to the current crisis in the Middle East, the only way to counter the rise of Islamic fundamentalism and terrorism, is to support the main democratic Iranian opposition in its fight against the Islamic Republic of Iran. That is why we must fight for regime change in Iran to restore freedom and justice for 80 million beleaguered Iranians.”

The Hill: Hillary Clinton is backing President Obama's diplomacy with...