Iran Regime’s Head of Judiciary Is Latest to Threaten Rouhani 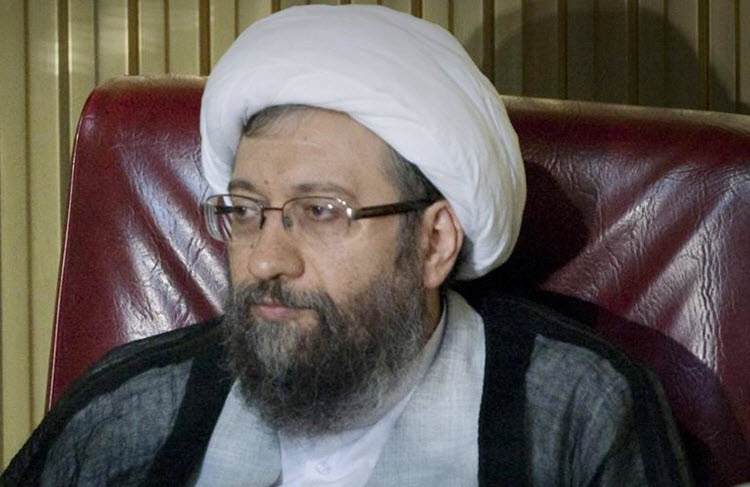 London, 16 May – The Head of the Iranian Regime’s Judiciary has become the latest Regime member to attack incumbent President Hassan Rouhani for his comments about other candidates standing in Friday’s ‘election’.

In a speech on Monday, May 15, Sadegh Larijani said: “Unfortunately some of the candidates acted in such a way as if they were [the Regime’s] opposition, blackwashing and questioning [the] state’s legal entities, a measure that is definitely against [the] Regime’s interests.”

He continued: “I decided to remain silent only for regime’s interests and I’ll continue to do so till the end of the election. But when the time is right, I’ll say what needs to be said.”

The second half of the statement is rather strange because it seems like he has already made his feelings clear but perhaps he is waiting to see who wins the election, to know who’s side he needs to be on. After all, members of the Iranian Regime do not act on principle but rather clamour for power.

However, Larijani is just the latest Regime member to criticise Rouhani in this way.

On Sunday May 14, Mohseni Eje’i, the first deputy of the chief justice, remarked on how strange it was to hear Rouhani condemn the Regime’s long history of imprisonment and execution, when Rouhani has previously called for executions to be carried out during Friday prayers when they would be most visible.

Eje’i said: “Today, presidential candidates have made comments that are not only against regime’s values and its past, but they’re against Islam and Islamic values as well. Their comments are quite contrary to what they themselves used to say in the past. It’s strange how they’re raising such issues only to gain a few more votes, if they ever can.”

He continued by defending the judiciary, as you would expect. Note, that he has also specifically not named Rouhani, despite Rouhani being the only candidate these comments could be about.

While Mojtaba, a member of the Regime’s parliament, was bold enough to address Rouhani specifically.

He said: “Back in 1980, this same Mr. Rouhani used to shout let’s execute these (anti-revolutionaries and dissidents) in public and Friday prayer places. Mr. Rouhani! Why are you raising such issues now?”

On May 9, Rouhani gave a speech in which he remarked that the Iranian people would not vote for candidates who only knew how to execute and imprison people. This comment was designed to make people think twice about voting for his main opponent, Ebrahim Raisi, who was on the 1988 Death Commission which sent 30,000 political prisoners to their deaths.

In reality, most of Rouhani’s governmental positions over the years have been related to security, which means the repression, imprisonment, and execution of the Iranian people.