US Resolution Seeking Justice for 1988 Massacre Committed by Iranian Government 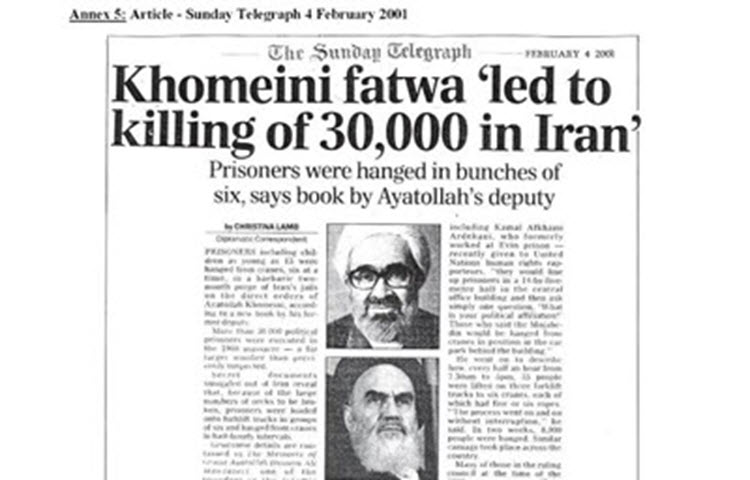 London, 1 Jun – The United States Congress recently introduced a resolution regarding the 1988 massacre in Iran. It was the largest mass execution of political prisoners since the Second World War.

Mike McCaul, the House Homeland Security Chair, was the one who introduced the resolution. While the resolution was being introduced, the President of the Islamic Republic of Iran, Hassan Rouhani, was speaking at the 71st Session of the United Nations General Assembly.

Before the event, many people protested in front of the United Nations and highlighted the numerous human rights abuses that take place in Iran on a daily basis. They also pointed out that the perpetrators of the 1988 massacre, in which more than 30,000 people were executed, have still not faced justice.

The resolution introduced in Congress denounces the Iranian government for the 1988 massacre. It also calls for justice for all of the victims of the crime.

The resolution emphasises that during the period of only four months, the government of Iran was responsible for the “barbaric” executions of tens of thousands of political prisoners. It also points out that it was the Supreme Leader at that time, Ayatollah Ruhollah Khomeini, that issued a religious decree (a fatwa) that specifically targeted the PMOI / MEK (the People’s Mojahedin of Iran / the Mujahedeen-e-Khalq).

A former senior official of the regime warned the members of the so-called “death commission” that the crime was horrific and would go down in history as one of the worst carried out by the Islamic Republic.

Prisoners were brought to stand in front of commissions and asked briefly about their political stances. Anyone who did not renounce their affiliation with opposition groups that the regime despised were sent for execution. The executions were carried out en masse – some by hanging, some by firing squad. Often they underwent severe torture before being killed. The bodies of the victims were then buried in collective graves.

Many of the victims were women, even pregnant women, and teenagers. Many were imprisoned for activities such as owning political books or for joining in a peaceful protest in the street. Others were executed because of their faith or religion.

The resolution states that some of the people responsible for this atrocity are still working within the government of Iran. This is appalling by any standards, and there needs to be justice for the victims.