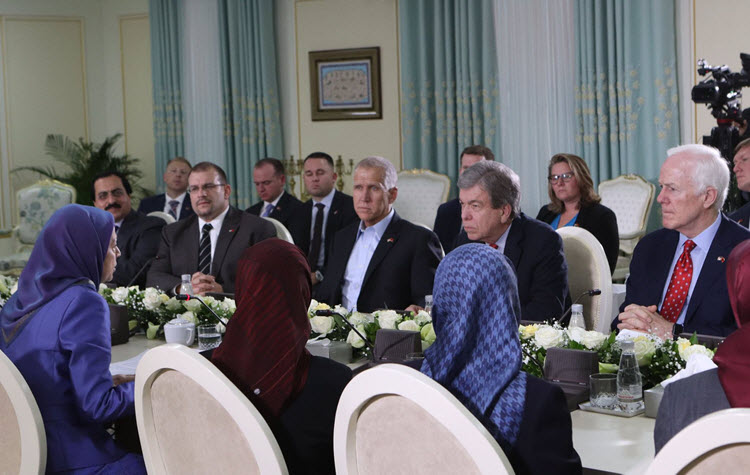 London, 14 Aug – The US Congress is taking the lead on a stronger policy against the Iranian Regime but what does that mean?

Human rights activist Heshmat Alavi wrote an analysis for Al Arabiya in which he praised the US Congress for new sanctions against the Iranian Regime and assessed that the mullahs were on their last legs but stressed that Congress’ new policy should also publicly support the Iranian people’s democratic resistance.

This is not a new idea and indeed many members of Congress already support the Resistance, including Roy Blunt, Vice President of the Republican Conference, and member of the Appropriation, Select Intelligence, Rules and Administration, and Commerce, Science, and Transportation committees; John Cornyn, the Majority Whip, and a member of the Judiciary, Select Intelligence, and Finance committees; and Thom Tillis, a member of the Armed Services, Judiciary, Banking, Housing and Urban Affairs and Veterans’ Affairs committees, who visited Albania where many members of the Iranian opposition are living in exile.

The dissidents were forced to move after countless attacks and blockades of supplies by the Iranian Regime and its Iraqi proxies.

The delegation met with the President of the National Council of Resistance of Iran (NCRI) and the leader of the Resistance, Maryam Rajavi, to discuss the Iranian Regime’s menacing role in the Middle East and across the world.

The NCRI released a statement about the meeting, thanking the US politicians and praising them for sanctions against the Iranian Regime.

It read: “Maryam Rajavi thanked the Senators for their decisive position vis-à-vis the Iranian regime, especially the adoption of a new resolution which imposed sanctions on the clerical regime and the Islamic Revolutionary Guards Corps (IRGC) for human rights abuses, the ballistic missile program, and the export of terrorism. She expressed gratitude for the efforts of the U.S. Senate, particularly Senator Blunt, regarding the protection of thousands of MEK members in Camp Liberty, Iraq, and their safe relocation to Albania.”

Other US politicians who have supported that Iranian Resistance includes Senators John McCain, Jeanne Shaheen, and Carl Levin, as well as former Secretary of State John Kerry, who helped arrange the relocation of Iranian dissidents to safety in Europe.

Alavi singles out McCain, in particular, as being such a vocal supporter of the Resistance that the Iranian Regime has become terrified.

Alavia wrote: “Tehran is extremely concerned over the NCRI and PMOI/MEK gaining growing recognition, especially considering the fact that the Trump administration is in the midst of weighing its comprehensive Iran policy. More than ever before regime change is becoming the most likely option for Washington’s Iran dogma.”

He continued: “Many consider the progress made by the NCRI and PMOI/MEK as unprecedented and the necessary campaign to turn the tide against Tehran’s regime. After nearly 40 years of rendering havoc and destruction, it is high time the international community acknowledges the Iranian people and their organized opposition in their endeavour to bring about change in Iran with the objective of establishing freedom and democracy in Tehran.”

Reuters: Iran, defying the West over its disputed nuclear...