Protests in Brussels in Support of People of Iran 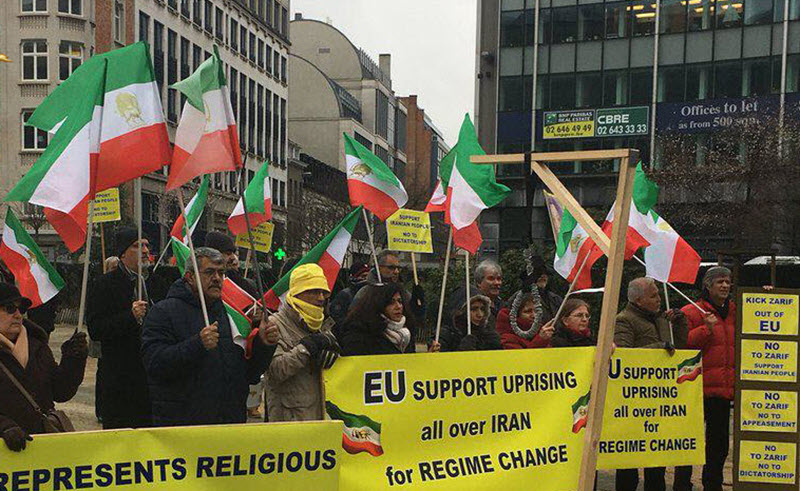 London, 12 Jan – On Wednesday, just ahead of a meeting between several European leaders and Iranian leaders in Brussels, people took to the streets to protest. The meeting, to be held the next day is with regards to the Iran nuclear deal.

Representing Iran was foreign minister Mohammad Javad Zarif. The meeting comes just a day before the United States President Donald Trump was due to make a decision about reimposing oil sanctions that were lifted as one of the terms of the nuclear deal.

It is expected that Great Britain, France, Germany and Iran will reaffirm their support of the nuclear deal even though President Trump has rejected it following much criticism.

Before becoming President, Trump slammed the nuclear deal and said he would scrap it. He affirmed on numerous occasions that the Obama administration was not tough enough on Iran – something he said would be high on his agenda.

The aim of the nuclear deal, negotiated under the Obama administration, has the aim of curbing Iran’s pursuit of nuclear weapons. In return, Iran would see some of the sanctions it was subject to lifted.

Since the end of last month, the people of Iran have been taking to the street to protest against the corrupt and brutal regime. The protests and anti-government demonstrations started off as calls for action faced with the economic hardship a great portion of the population was suffering from, but they quickly turned into calls for an end to the Iranian regime’s rule.

The protests in Belgium were held outside the buildings of the European Commission and European Council where the meeting with the Iranian foreign minister was to take place. Among the protesters were supporters of the People’s Mojahedin Organization of Iran (PMOI) and the National Council of Resistance of Iran (NCRI) as well as members of the Iranian community living in Belgium.

Members of the European Union have repeatedly voiced their support of the nuclear deal and it appears that some are placing the nuclear deal over the cause of the Iranian people. Many do not want to rock the boat with Iran, so are remaining silent.

However, it is absolutely crucial that the leaders of the West denounce Iran’s actions. It is intolerable that the situation has reached such a critical point for the people of Iran who only want what much of the rest of the world takes for granted. They want freedom from suppression, democracy and human rights.

The protests in Iran are reaching a critical stage because the people know that it is their only chance of achieving a bright future. Despite many comments about the Rouhani government having moderate elements, during his time in office the number of political prisoners being executed rose. When the Iran nuclear deal was negotiated, the people should have seen some benefit from the huge sum of money its government received. But it didn’t.

AFP: Japan said Wednesday it would continue to cut...