UK and Saudi Arabia Agree to Work Together to Counter Iran 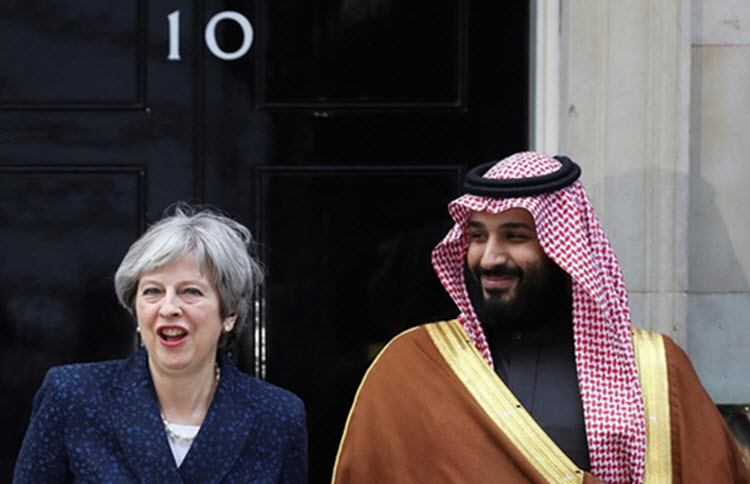 London, 08 Mar – The UK and Saudi Arabia have agreed that they must work together to counter Iran’s destabilizing actions in the Middle East, according to the office of British Prime Minister Theresa May.

This came after May and Saudi Crown Prince Mohammed bin Salman met in Downing Street on Wednesday.

They also agreed that the only way to end the crisis in Yemen, which is being exacerbated by the Iranian Regime’s support for the Houthi terrorist cell, is through a political solution that tackles both the conflict and the humanitarian suffering.

May and Mohammed bin Salman also agreed that it was essential to keep access routes to Yemen open for humanitarian and commercial use, to ensure that the people of Yemen are not stuck in a blockade.

It is good that these global powers are working together to contain Iran’s destruction of the Middle East, which so far involves Yemen, Iraq, Syria, and Lebanon, and hopefully it will stop Iran from building its Shiite Crescent across the region.

The Shiite Crescent refers to Iran keeping control of the several states across the Middle East- from the Persian Gulf to the Mediterranean, which they would then use to transport weapons, troops, and money to their terrorist proxies (i.e. Hezbollah and Hamas) with greater ease.

It is no secret that both May and Mohammed bin Salman have been concerned about Iran’s destabilisation of the Middle East for some time now.

Mohammed bin Salman recently said that Iran was part of an axis of evil, along with Turkey and extremist groups, many of whom are backed by Iran.

Back in February, May told reporters in Berlin that the UK shared concerns over Iran’s destabilizing activities that were voiced by Donald Trump and member of the American government.

She said: “We stand ready to take further appropriate measures to tackle these issues.”

And this is also reflected by other states, like France. France’s Foreign Minister Jean-Yves Le Drian, who visited Iran on Monday, promised to address Iran’s role in the Middle East with Iranian President Hassan Rouhani.

In a statement before his visit, Le Drian said that “Iran’s regional action also has destabilizing consequences for the region” and that these Middle Eastern conflicts needed to be resolved with respect for “the sovereignty of states”, indicating that Iran should not be allowed to meddle.

Mohammed bin Salman is also set to meet Trump in Washington later this month, where Iran’s regional destabilisation will be a major topic of discussion.

AP: Iraq's prime minister is visiting Iran where the...