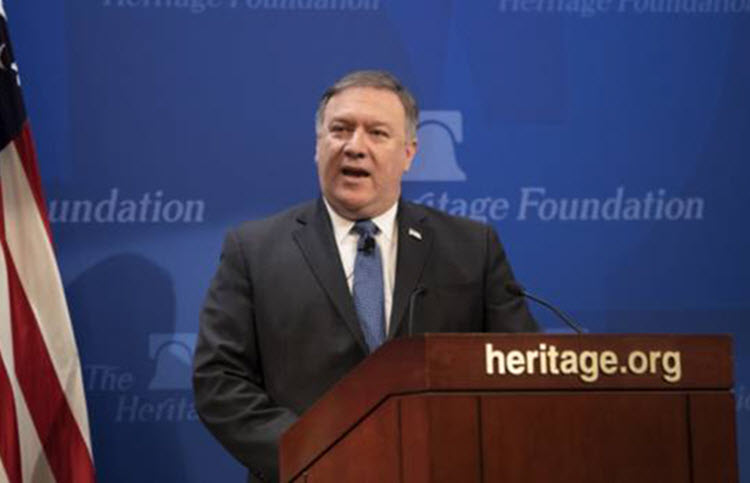 London, 22 May – US Secretary of State Mike Pompeo recently spoke at the Heritage Foundation in Washington, DC about Iran and how the Donald Trump administration plans to tackle their threat after withdrawing from the nuclear deal earlier this month.

Pompeo began by explaining why Trump had taken the decision to nix the deal, known as the Joint Comprehensive Plan of Action, from its failure to prevent Iran from obtaining a nuclear bomb to its enrichment of Iran and its malign military.

Overall the deal had “fatal flaws”, including:

• Failure to ensure that money went to the poorest in society, rather than the Regime and its proxy groups

Pompeo said that rather than make the Middle East more manageable, the deal actually has helped Iran expand its influence and increase its terrorist activity in countries like Lebanon, Syria, Iraq, Afghanistan, and Yemen. Iran is now using their influence to get others to attack US allies to Israel and Saudi Arabia, whilst keeping their own hand blood free.

During his address, Pompeo also reminded us that Iran has kidnapped several Americans and continues to hold them as barging chips, but assured us that the administration is working for their release.

Pompeo said: “The bet that the JCPOA would increase Middle East stability was a bad one for America, for Europe, for the Middle East, and indeed for the entire world. It is clear that the JCPOA has not ended Iran’s nuclear ambitions, nor did it deter its quest for a regional hegemony. Iran’s leaders saw the deal as the starting gun for the march across the Middle East. So, the path forward. America’s commitment to the Iran strategy President Trump laid down in October remains. It will now be executed outside of the JCPOA.”

The next steps include the US working with their allies to put stringent sanctions on Iran in order to bring the Regime to its knees and allow the people’s uprising, which began in December 2017, to fulfil its wish to overthrow the Iranian regime.

Pompeo said: “We will advocate tirelessly for the Iranian people. The regime must improve how it treats its citizens. It must protect the human rights of every Iranian. It must cease wasting Iran’s wealth abroad. We ask that our international partners continue to add their voice to ours in condemning Iran’s treatment of its own citizens.”

He continued: “The protests – the protests of the past few months show that the Iranian people are deeply frustrated with their own government’s failures. The Iranian economy is struggling as a result of bad Iranian decisions. Workers aren’t getting paid, strikes are a daily occurrence, and the rial is plummeting. Youth unemployment is at a staggering 25 percent. Government mismanagement of Iran’s natural resources has led to severe droughts and other environmental crises as well… The protests last winter showed that many are angry at the regime that keeps for itself what the regime steals from its people.”

With regard to a new deal on Iran, Pompeo promised that any new agreement will ensure that Iran never acquires a nuclear weapon and tackles Iran’s other problems as well.

Pompeo previously spoke at the Heritage Foundation in 2015 and gave a speech entitled A Pathway Forward: An Alternative to the Flawed Iran Nuclear Deal.