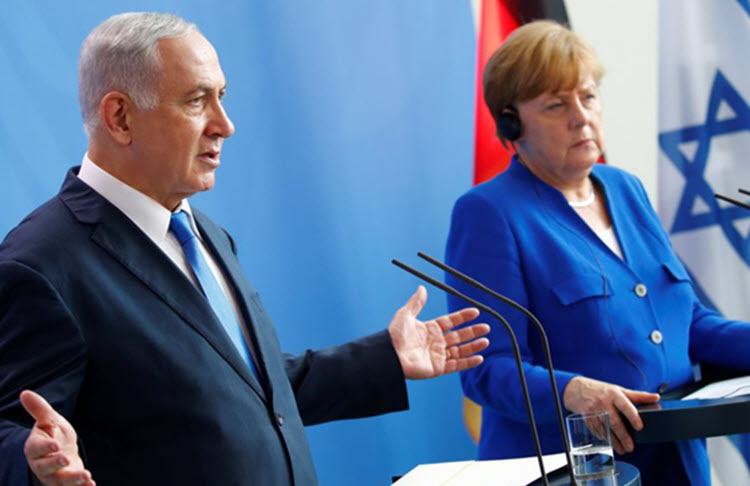 London, 5 Jun – German Chancellor Angela Merkel has agreed that Iran’s malign activities in the Middle East are a pressing concern, particularly for the security of Israel.

During a joint press conference with Israeli Prime Minister Benjamin Netanyahu on Monday, Merkel said: “We have the same goal that Iran must never get a nuclear weapon and the difference between us is how to do that… We support Israel’s right to security and have said this to Iran at all times.”

Netanyahu is currently on a tour to convince European countries to pull out of the 2015 nuclear deal with Iran, as the Donald Trump administration did last month.

At the press conference he explained that the deal has only allowed Iran to increase its military presence in Syria and Yemen, as the mullahs used sanctions relief to fund their military, including suppressive security forces and proxy militias, rather than to provide help to their people.

He said: “[Iran wants to basically conduct a religious campaign in largely Sunni Syria but try to convert Sunnis. This will inflame another religious war — this time a religious war inside Syria and the consequences will be many, many more refugees and you know where exactly they will come.”

Netanyahu has also shared secret files surrounding Iran’s nuclear weapons, which were seized from a Tehran warehouse in January, with European security services. One document is memorandum that hands the responsibility for the production of weapons-grade enriched uranium to the Iranian defence ministry.

With these files, Netanyahu hopes to prove that the 2015 deal was based on a false promise and can therefore never be trusted.

However, Merkel stood behind the deal. She said that the deal prevented Iran from getting a nuclear weapon, at least for a short while, even though German intelligence agencies have produced a report that Iran is still steadfastly committed to obtaining a weapon of mass destruction.

She believes that a supplementary deal to address Iran’s other malign issues, like its ballistic missile programme and its regional interventionism. However, one of the problems with this approach is that Iran will never agree to it while still reaping the benefits of the nuclear deal.

Germany, and Europe as a whole, should take a strong stand against Iranian government and withdraw from the 2015 nuclear deal. That is the only way to address all of the many problems with Iran.

Netanyahu will meet with French President Emmanuel Macron in Paris today and British Prime Minister Theresa May in London on Wednesday.

Iran says it will not hold talks with U.S. over Iraq

AFP: The spokesman of Iran's electoral watchdog, the Guardians...