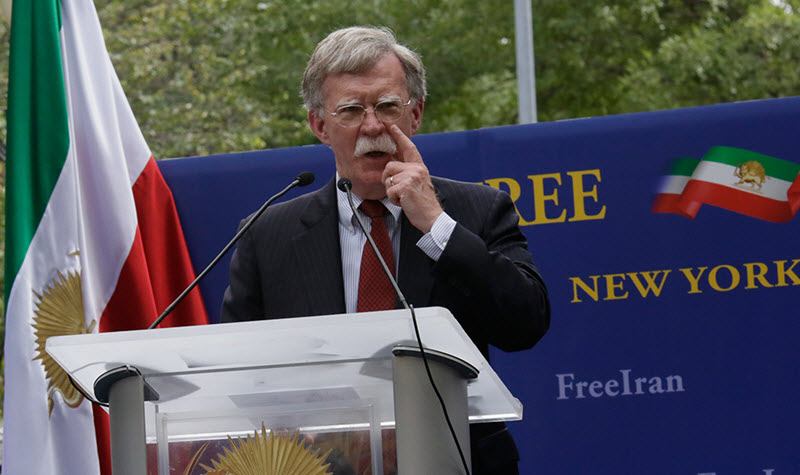 London, 26 Jun – With regards to Iran and particularly the recent developments after the last December and January uprising in the country, and President Trump’s Iran-nuclear-deal exit, the US National Security Advisor John Bolton has certainly been an outspoken and steadfast personality supporting the current US-Iran foreign policy agenda.

For many years Iranian dissident supporters of the MEK (Mujahedeen-e Khalq of Iran) in Europe and United States have come to respect and count on Mr. Bolton for his support for freedom of Iran and the notion of a regime change in that country.

Beside Mr. Bolton, there are many prominent and respected US political personalities from both parties that anxiously support a policy of regime change in Iran for the United States. With current state-of-affairs in Iran right now, that dream may not be too far from being fulfilled ending a 40 year long nightmare for Iran, the region, and the United States.

MEK, as an organization that has struggled against two dictatorships of Shah and Khomeini for more than 50 years, has become the pivotal organization in recent years standing against the mullahs’ rule of executions and terror.

The mullahs’ regime and its lobbyists in the west managed to blacklist the MEK organization with the help of proponents of the appeasement policy in the 1990s.

But, after many years of continuous hardship and many sacrifices, the MEK managed to remove itself from all lists establishing itself as the sole resistance movement, with widespread support among Iranians inside and outside the country that is determined and well-situated to bring democracy and regime change to Iran.

The annual gathering of the resistance in Paris about end of June each year – bringing in about 100,000 supporters each year – has been an obvious display of MEK’s large and widespread support among Iranians and the capacity that it carries to overthrow the religious-dictatorial regime of mullahs replacing it with a democratic republic.

Despite mullahs’ complete and brutal crackdown on the media and public, one can still see how this organization is truly effective in the internal political scene and developments of Iran. The most outspoken people about MEK’s support inside the country are not their supporters, but in fact it is the mullahs’ regime officials and even its supreme leader that confess to the strength and therefore widespread support of the MEK.

Khamenei himself, following the December and January uprising, admitted openly on regime’s state-controlled media that the MEK members and supporters were the instigators and organizers of the uprising that spread in 142 cities in the country in a matter of few days.

The mullah’s regime and the support for the appeasement policy toward this theocratic regime has already cost the United States a lot of lives and treasure.

Those who returned from Iraq war can bear witness to this truth that what claimed many American lives in that country was the money and arms provided by the regime to its proxy militias in Iraq for whom the designated targets were American soldiers.

That is beside many terror attaches on American interests in the region as well as throughout the world, again costing many American lives.

Nowadays, with the already disgraced policy of appeasement in the United States, the Iranian well-paid lobbyists are trying again to play a new mind game portraying that if the US comes out in support of the MEK and the uprising, this will cause the people in streets of Tehran to suddenly shift sides and “rally behind the flag” of the mullahs.

Anyone that has watched the uprising in the streets of Tehran and other cities closely and listened carefully to what people have to say, would laugh his heart out at this statement.

There is a Persian saying that, “even a cooked chicken would jump out of the plate and start laughing.”

“The enemy is right here [referring to the mullahs]… It is a lie that they say it is US.”

That was one of the most prominent chants that could be heard throughout the country during the uprising. And, in recent days that people are protesting in Tehran and other cities in yet large numbers, you could still hear them chant the same slogan.

Now, Iranian lobbyists better stop crying for the “Iranian public” and start worrying for their beloved late “appeasement policy” which is no more.

Time to support the Iranian people and the Iranian Resistance with MEK at its heart to free the world and Iran from the agony of the mullahs’ regime.

This year in Paris Iranian dissidents once again will gather among many important western politicians including important US politicians to cheer for a soon-to-be-realized “Free Iran”.

How Can the US Support the Iranian Protesters?

AFP: Iran's nuclear programme was at the centre of...