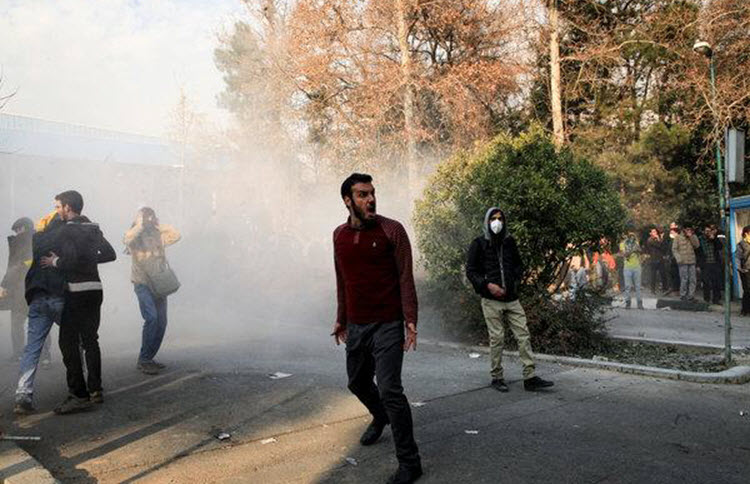 London, 12 Dec – Although the Islamic Revolutionary Guard Corps (IRGC) warned in mid-December last year that mass protests might occur, and dispatched special patrols of Basij forces in an attempt to suppress popular dissent, protests swept across the country later that month. The nationwide uprising tore down the wall of oppression.

The mass protests were so powerful, that Iranian President Rouhani recently stated that he believes that the uprising encouraged the US President to exit the nuclear deal.

Iranians inside the country who have been interviewed, talked about the domestic situation and public opinion over the causes and effects of the severe sanctions.

Zohreh, a blogger who previously worked for some reformist newspapers in Tehran, said “The ruling Mullahs have security forces here and apologists in abroad.” Zohreh, whose full name is withheld for her security, believes the western media do not reflect reality in Iran. “While Iranians are protesting and daily executions are a part of our life, a golden opportunity like Khashoggi crisis helps the apologists to deflect mounting criticism over Iran’s domestic oppression and spending its wealth to support terrorists across the Middle East.” She is referring to the Guardian’s Iran correspondent Saeed Kamali Dehghan, who tweeted that the Saudi journalist was killed because of speaking to him on the phone. His tweet was deleted hours later.

US President Trump’s Iran policy is to hold it to account for its behavior by imposing tough sanctions, but Western media claims that Trump’s goal is regime change.

Reza, a 67-year-old homeless man in Isfahan province said, “Because of my mother’s illness, I sold my lands and even a kidney to cope with the cost of medical operations, but it wasn’t enough and she passed away.” While Rouhani and his European counterparts claimed sanction relief would improve the living standards in Iran, Reza has been homeless since 2016. He said, “Sanctions do not matter. We have been poor, our water, gold, oil and etc are stolen, this country is riddled with corruption.” Reza worked as a farmer, and always participates in protests. “The authorities are responsible for our difficulties, not the foreigners,” he states.

The First Deputy Speaker of Iran’s Parliament Masoud Pezeshkian asked his colleagues last Friday, during a ceremony held by Parliament, “What have we done that people hate us?”

An answer might lie with the workers of Haft Tappeh Sugarcane Agro-Industry in Khuzestan Province in the southwest of Iran, who have been protesting for four weeks for their unpaid salary. A protester asked in a video on social media, “Would the kids of authorities tolerate two days without food, no clothes? Let’s emphasize, two days without their luxury cars?”

The human rights situation is deteriorating claims Fouad, an unemployed young Iranian Arab. He says that there are “more executions, more arbitrary arrests of people.” His claim seems to be backed up by reports from human rights organizations that allege that last month 22 Iranian Arabs were secretly executed by the Mullahs for their political beliefs. According to Fouad, Arab minorities are viewed as second-class citizens. “When the world doesn’t care about you, and executed friends are buried in secret graves, remaining silent is not an option.”

Reuters: While international sanctions have made life a struggle...