Pompeo: We Must Contain Iran in mid East 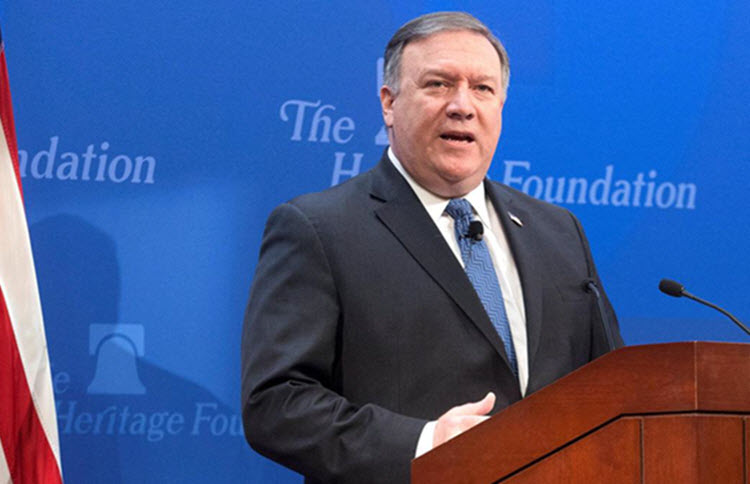 London, 22 Jan – US Secretary of State Mike Pompeo conveyed one clear message on his recent trip to the Middle East, where he was reassuring US allies that the Donald Trump administration remained committed to the region, and it was that Iran must be contained.

Pompeo travelled to Jordan, Iraq, Bahrain, the United Arab Emirates, Qatar, Saudi Arabia and Oman for high-level talks with monarchs and ministers over just seven days, but at each meeting, Iran was a focus.

The US Embassy in Riyadh explained that Pompeo addressed Iran, as well as the ongoing conflict in Yemen, where Iran is arming the Houthi rebels, and Afghanistan, where Iran is talking with the Taliban and advocating for them to be a part of the Afghan government.

The US State Department said that Pompeo placed an emphasis on the need to reach a political solution to the crisis in Yemen, with the help of all countries in the region, and to stand against the “Iran’s malign activity and to advance peace, prosperity and security”.

Pompeo said: “The work that was done [at the UN-sponsored talks in December] in Sweden on Yemen was good but both sides [need] to honour those commitments. Today, the Iran-backed Houthis have chosen not to do that.”

All of the countries that Pompeo visited, except for Iraq, are members of the newly created military and political alliance, known as the Middle East Strategic Alliance (MESA), which is designed to tackle regional security issues such as the Islamic State and Iran.

During an interview with Al Arabiya news channel, Pompeo said: “Countering Iran, the threat from the world’s largest state sponsor of terror, the Islamic Republic of Iran, is something [Trump] has identified as one of his top priorities. We will do it with our partners in the Middle East. This is a mission for the world. It’s incredibly important and we are determined to do it.”

But some of the prospective members of MESA are actually on good terms with Iran, for instance, Qatar, which might throw a spanner in the works. After all, in 2017, Saudi Arabia, the United Arab Emirates, Bahrain and Egypt cut diplomatic and economic ties with Qatar for its relations with Iran and alleged support of terrorist groups. Then, Riyadh and Abu Dhabi removed Qatar from the coalition fighting the Houthis, so Doha increased its relations with Iran.

The US envoy tasked with resolving the dispute, retired US Marine Corps General Anthony Zinni, resigned this month because regional leaders could not agree to a viable mediation effort.

While Pompeo did not reference any major breakthroughs on reconciliation between the nations, he did say that unity was important and that Qatar remained a US ally. However, Omani Foreign Minister Yusuf bin Alawi bin Abdullah did meet with Qatari Emir Sheikh Tamim bin Hamad al-Thani to discuss the Gulf crisis after Pompeo left and Doha appears to be ready to move in the right direction.

DPA: Irans conservative judiciary has for the first time...

AP: Iran's Supreme Leader is blaming the U.S. and...