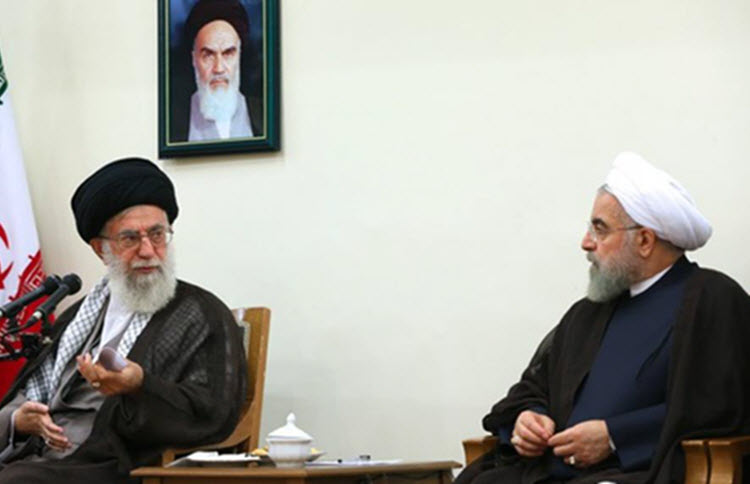 The Iranian rulers’ internal disputes continue to grow, even as domestic and global crises increase. In fact, at a Saturday night meeting with reporters, Iran’s President Hassan Rouhani called political rivals who have attacked him and his allies, “traitors”.

Supreme Leader Ali Khamenei turned down Rouhani’s requests for more authority, last week. Khamenei stated that there is nothing wrong with the constitution, He alleged instead, “We have problems with our officials.” But, Rouhani repeated his demands for more authority very specifically: “As new sanctions have been levied against us, I raised the issue with the Supreme Leader that during these wartime circumstances the country needs an agenda and a commander. You are our commander and we are your followers. He said no and then said you have to take up command yourselves. There’s nothing wrong with that and anyone can become a commander. However, the authority of these commanders is important.

Otherwise, ‘I am a commander.’ What is the result of all this? It will bear no fruit. The authority of this commander is important!”

Khamenei’s made remarks placing blame for the failure of the 2015 nuclear deal failure on Rouhani’s shoulders, but Rouhani reiterated that Khamenei had agreed with holding a referendum about entering negotiations. “Back in 2004, I asked the Supreme Leader to place the nuclear issue before the people based on Article 59 of the constitution. I explained and even sent a written letter to him, in addition to expressing my thoughts in person. He considered the reference to this article as a positive measure and agreed. However, there was no mentioning of when this [referendum] would be carried out. Then, a new president came into office and everything changed,” Rouhani said.

“There are those who think if the people lose their trust in the government those supporting the government will not garner any votes in the upcoming Majlis (parliament) elections. Others are heard raising the stakes even further, saying we must place pressure on the government and tell the people they do not know how to govern the country in order to have our members enter the Majlis. If this is true it would be the biggest act of treason against the Iranian nation and history,” Rouhani continued.

In his remarks, Khamenei specifically emphasized that Iran should be “paving the path for a young and Hezbollah-style government.”

The Majlis have recently witnessed massive attacks by the Khamenei camp against Rouhani.

Rouhani’s faction was described as “an enemy larger than America,” by Majlis member Hossein Maghsoudi, who added they are signaling a war with the U.S. in order to further plunder the country.

Members of the Khamenei faction describe Rouhani as a president who consistently violates the laws.

Meanwhile, Rouhani attacked the media outlets, asking why don’t they repeat the Supreme Leader’s lies about “natural gas being provided to ten new villages each day” and “drinking water to 30 new villages each month” in their daily news headlines. He told them, “You lack the courage to criticize the shortcomings of other apparatuses. You should publish the government’s successes. All the while you have no will to criticize the judiciary, the Majlis and others…”

Rouhani referred to some of the pressures currently being faced by Tehran. “The fact that Iran’s ship could not dock in foreign ports for 10 days to unload is unprecedented in our history. The U.S. State Department is constantly in contact with that small country to not allow our ship to dock. This is unprecedented in the past 40 years. The fact that an oil tanker is shipping Iran’s oil is followed by satellites during its entire voyage, registering its number, constantly knowing where it is, who is buying, who is selling… All this is unprecedented in the past 40 years,” he explained. And he warned the people that even in the current circumstances, the priority must be safeguarding the Mullahs at all costs — even as the people become poorer.

“People may have lesser to eat at nights and live in hardships. In my opinion, this is not important. This is not our priority,” Rouhani said.

Iran: The Fear Pyramid Has Been Reversed