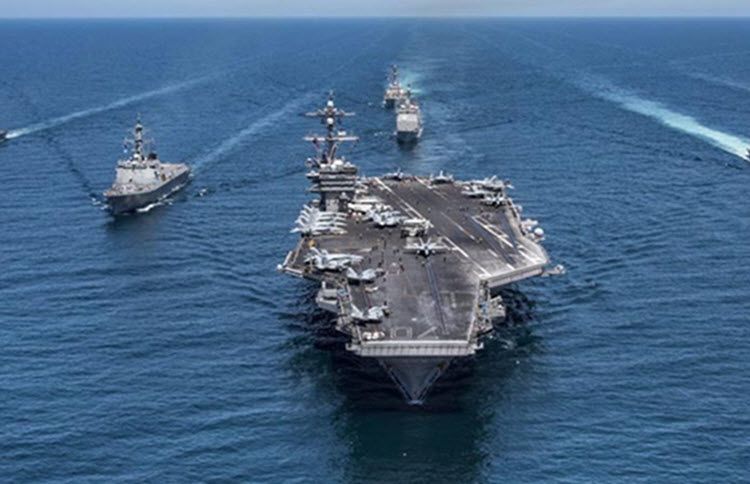 Last month, the USS Abraham Lincoln and its contingent of Navy destroyers, cruisers, and 70-odd aircraft arrived in the Persian Gulf region to counter what US officials described as heightened Iranian preparations to strike US targets.

These threats, which are still secret for national security reasons, came shortly after the US announced a stricter crackdown on Iran’s oil exports in late April. This involved the expiration of sanctions waivers for the eight largest buyers of Iranian oil; waivers that had come into place in November after US sanctions were finally reimposed. Since then, the US has gone further. On Friday, the US Treasury announced sanctions against Iran’s largest petrochemical company.

Now, the Lincoln is still about 200 miles from Iran’s southern coastline in international waters east of Oman, but the interactions between the Lincoln strike group and Iran’s naval forces have all, so far, been “safe and professional”, according to Lincoln Commander Rear Adm. John F. G. Wade.

He said: “The Iranians have done nothing to impede our manoeuvrability or acted in a way which required us to take defensive measures.”

However, many officials do not feel the threat has gone away.

Marine Gen. Frank McKenzie, the head of Central Command, said over the weekend that Iran appears to have altered its preparation for potential attacks, indicating that they may be planning something.

McKenzie said: “It is my assessment that if we had not reinforced, it is entirely likely that an attack would have taken place by now. We believe they are recalculating. They have to take this into account as they think about various actions that they might take.”

He had previously noted that he had not ruled out asking for more defensive forces in order to deter Iran, in addition to the 900 troops being sent out soon and the 600 troops whose stay is being extended.

Iran is threatening the US because US sanctions imposed after the US pulled out of the nuclear deal are hurting the Iranian economy. It has gotten so far that Iran’s Revolutionary Guard Corps (IRGC), which was recently designated as a terror group by the US, said that it doesn’t fear a war with America.

McKenzie recently told troops travelling with the Lincoln: “I requested this ship because of ongoing tensions with Iran. And nothing says you’re interested in somebody like 90,000 tons of aircraft carrier and everything that comes with it. Our intent by bringing you here was to stabilize the situation and let Iran know that now is not the time to do something goofy.”

By Jubin Katiraie The Iran Human Rights Monitor has...