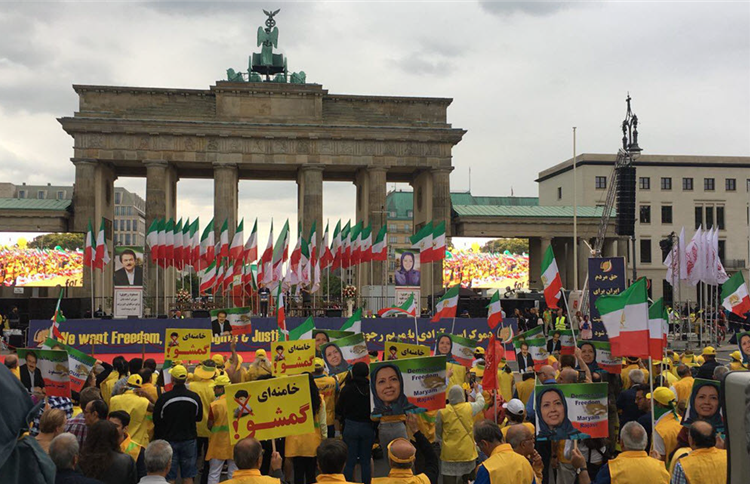 Some 15,000 Iranians gathered in Berlin on Saturday, July 6, to protest the EU’s ongoing “appeasement” of Iran’s clerical establishment and show their support for the Iranian opposition, its leader Maryam Rajavi, and her 10-point plan for a free Iran.

Rajavi addressed the protesters via a video message that they were essential in helping to overthrow the “mullahs’ regime”, noting that their activism is showing the Iranian people not to give up in the fight for democracy and sovereignty in Iran, expressing to Western governments that a strict anti-appeasement policy on Iran is welcomed by Iranians, and telling the Iranian regime that its time is nearly up.

Rajavi spoke about Tehran’s terror plots on European soil, which culminated in the arrest of an Iranian diplomat to Vienna last year. The diplomat, currently held in jail in Belgium, planned to bomb a rally held in Paris by the main Iranian opposition coalition, the National Council of Resistance of Iran (NCRI), and supplied the explosives to the would-be bombers.

Rajavi said that over the past three years, German police have arrested a dozen “mercenaries” and “terrorists” from Iran’s Revolutionary Guards’ (IRGC) Quds Force and the Ministry of Intelligence (MOIS), with a number of them subsequently tried and jailed by the German judiciary. That is why any MOIS and IRGC mercenaries should be tried, punished and expelled, she said.

Rajavi added: “The religious fascism is truly the greatest threat to peace in the world today. From Uranium enrichment, meaning preparation for a nuclear bomb, to the development of ballistic missile program, in violation of Security Council Resolution 2231, to the deployment of forces in Syria, in violation of Resolution 2254, and the intensification of its criminal war in that country”.

Rajavi made clear that the crimes of the Iranian authorities were being aided by concessions from Europe and that this must stop. She asked German Chancellor Angela Merkel to lead a special initiative at the European level against Iran for human rights violations and setting up an international delegation to visit Iranian prisons and political prisoners.

• Leo Dassenberg, chairman of the Free Iran Committee in Germany and a former member of the federal parliament

AP: An Iranian semi-official news agency is reporting that...