Conference in Albania: Foreign Policy Towards Iran and Role of Resistance 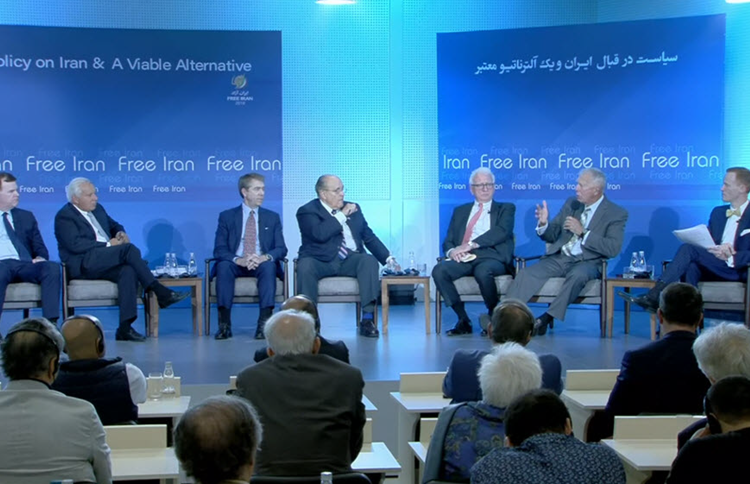 On Thursday, 11 June, a number of distinguished speakers gathered in Ashraf-3 in Albania to discuss the policy options of the West with regards to Iran and the role of the Iranian Resistance in bringing eventual change to the country.

Those bringing their experience and expertise to the event were Robert Torricelli, former US Senator; Rudy Giuliani, former Mayor of New York and personal attorney to US President Donald Trump; John Baird, former Foreign Minister of Canada; Robert Joseph, former undersecretary of State for Arms Control and International Security and General James Conway, former Commandant of the U.S. Marine Corps.

The main takeaway from the event was that the Iranian regime is close to collapse because of its desperation. It is being put under a maximum pressure campaign by the United States and the speakers agreed that this must continue, and even be intensified.

The speakers also discussed the role of the main democratic opposition People’s Mojahedin, otherwise known as the Mujahedin-e Khalq (PMOI / MEK) and had high praise for opposition leader Mrs. Maryam Rajavi who has led the Resistance with such determination and strength. They also highlighted the role of the people in the popular uprising, especially the young people who are adamant that they will have a brighter future.

Former Senator Robert Torricelli said that the young people of Iran are a vital part of the movement towards a free and democratic country because they are selflessly taking to the streets to make sure that their voices, and their grievances, are heard. He praised them for their courage and said that their role is of utmost importance.

Ambassador Joseph, speaking about the role of the PMOI / MEK, said that the people have the advantage of being backed by an alternative to the regime – an alternative that he said is wholly viable. Torricelli emphasised that the United States must take advantage of the knowledge of the opposition that knows the regime better than anyone. He said that the opposition is being led by the very competent and strong Mrs. Maryam Rajavi who has the support of many in the West. Torricelli pointed out that the aim of the opposition is to achieve a free and democratic Iran where human rights are respected and equality is applicable to all.

Ex-Commandant of the US Marines General James Conway criticised the Iranian regime for being greedy and only looking after itself. He pointed out that the people of Iran are left to suffer in great poverty and appalling conditions while it grows richer. He said that regime officials must be held accountable for lining their own pockets to the detriment of the people of Iran.

Baird stated that the regime is at a disadvantage because the best weapon against it is the truth. He said that the regime cannot hide from the truth and that senior officials, as they well know, will be held accountable for the atrocities that it perpetrated and were involved in including the bombing of the Jewish centre in Argentina and the 1988 massacre of political prisoners in which tens upon thousands of political prisoners were executed in cold blood.

The Joint Comprehensive Plan of Action (JCPOA) was brought up a number of times and it was criticised for not covering everything that it should have in terms of Iran’s belligerence. President Trump was critiqued, especially by the Europeans, for exiting the nuclear deal that they considered to be essential for keeping peace and security in check. However, it has never done this, and as Trump pointed out, it just emboldened the regime. Baird expressed his dismay at the European attitude to the deal, saying “I don’t know how the British Foreign Secretary today could be wanting to resuscitate the JCPOA after what happened yesterday in the Strait of Hormuz. It just boggles the mind.”

Ambassador Robert Joseph also pointed out the flaws of the deal, saying that there were a number of critical issues including Iran’s ballistic missile program, its terrorist activities across the region and its interference in the affairs of other countries, especially its crimes against humanity in Syria. Speaking specifically about the nuclear threat, he said the only possible solution is regime change.

Speaking about the future of the regime, former Mayor of New York City and personal attorney to President Trump, Rudy Giuliani, said that the protests in Iran are becoming more political. They have evolved from being about economic and social issues to outright demands for regime change.

He also highlighted that the regime is desperate and is becoming more and more “frightened and irrational”, leading it to take desperate measures such as striking a US drone and attacking oil tankers in the Gulf. He said that he believes the mullahs are going to fall as a result of the protests that are taking place.

If anything stood out from this event, it was the overwhelming indications that regime collapse is imminent and that the people will soon have the freedom, democracy and human rights that they deserve.

While the whole world tries to restrain the crisis...