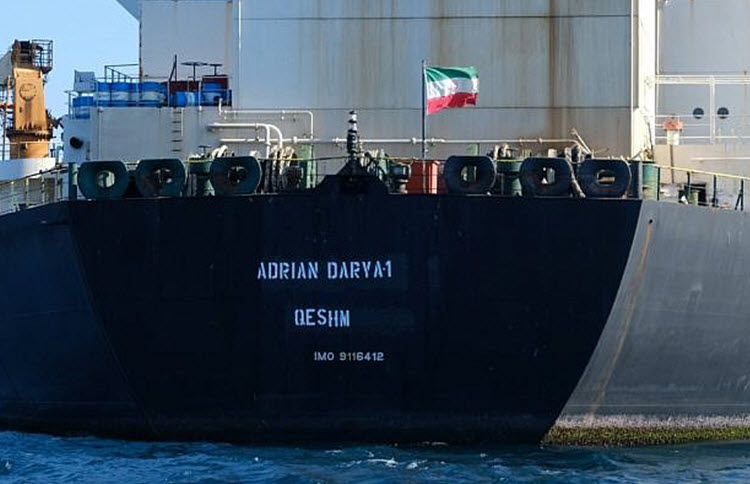 An Iranian oil tanker in the middle of a row between the United States and Iran is no longer headed towards Turkey, according to shipping data from Refinitiv Eikon on Monday, having changed its destination to Turkey over the weekend.

Initially, the ship, which is filled with US-sanctioned Iranian oil, was headed to Kalamata port in southern Greece, but Greece said it would not offer any facilities to the vessel in fear of what the US might do.

On Saturday, shipping data indicated that the ship was set to dock at the southern Turkish port of Mersin on August 31.

However, by Monday, Refinitiv Eikon data could not show any specific destination for the Adrian Darya, which is currently located south of mainland Greece, west of the island of Crete.

The Adrian Darya, originally called the Grace 1, was released from detention off Gibraltar in mid-August following a five-week standoff over whether the tanker’s Iranian oil was being transported to Syria in violation of European Union sanctions against the Bashar Assad government.

The US tried to prevent its release with a warrant, but the authorities in Gibraltar could not hold the tanker, because they were only operating under looser EU sanctions. Iran also renamed the tanker so that the warrant was technically for a ship with a different name.

The US says the tanker is controlled by the Iranian Revolutionary Guards (IRGC), which is deemed a terrorist group by Washington, and has told other countries in the region not to assist it, i.e. by providing it with fuel.

These comments came just days after the US warned countries not to let the tanker dock.

After Gibraltar and British Royal Marines seized the Iranian ship in early July, Iran seized the Stena Impero, a British-flagged Swedish-owned oil tanker, for supposed violations of maritime law in the Strait of Hormuz.

Iran has not released the Stena Impero, claiming that an investigation still needs to be carried out, but there are indications that Iran may release it soon following meetings between Iranian foreign minister Javad Zarif, his Swedish counterpart, Margot Wallstrom, and the chief executive of Stena Bulk, the ship’s operator.

AFP: "The execution of two Iranian women in Malaysia...

Press Association: A naval commander has told US President...