Raising Gasoline Prices in Iran – A Misconceived or Conscious Act? 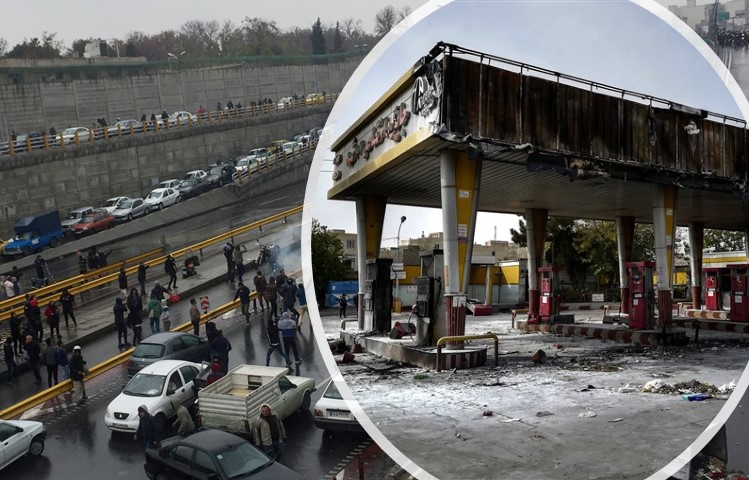 The reaction of the Iranian people to the rise of gasoline price has swept across Iranian cities and shaken the mullahs’ dictatorship. The regime’s repressive forces and ringleaders used direct firing to block protests and cut down internet lines so that news of the uprising would not leak to the resistance media and would not receive worldwide coverage.

During the second day of protests in Behbahan city, gunshots were heard in the midst of flames. Iran’s supreme leader Ali Khamenei confessed that some protesters were killed or wounded while acknowledging the people’s rage.

Expensive gasoline, the decision of the three branches

Following the sudden announcement of the rise in prices and rationing of gasoline, all three of the regime’s branches of state-backed the decision. In his remarks, Khamenei supported the decision-making process for the price hike of gasoline by the three branches:

“If the three branches decide I will support. I said it, I support it. The three branches leaders, with the backing of an expert, made a decision for the country, and that decision must be implemented.” (Khamenei’s website, 17 November 2019)

Of course, it is clear that after the angry reaction of the people, the regime’s factions blame each other, as the head of the office of Iran’s President Hassan Rouhani tried to distribute the blame: “In reality all parts of the government were involved in this decision and the government is just executing the plan.”

But beyond this lurid game, it must be asked: Didn’t the Iranian government have any knowledge about the livelihood situation of the people?

Didn’t they have any concerns about the reaction of the people while making gasoline expensive?

It is clear that the answer to both of the above questions is yes since the miserable conditions of people’s livelihoods are reflected every day in various government media.

“According to this report (Report of the International Energy Studies Center), although while the low-income 10 percent and poor strata of society have less use of energy subsidies than high-earning 10 percent, the elimination of this subsidy and its inflationary effects are most likely to hit people with lower income.”

Concerns over public reaction have long been heard with various warnings from all levels of the government. Fearful warnings, in which the rage of the people have repeatedly been described as “barrels” or “gunpowder warehouses.”

So, there is no doubt here that even without raising the price of gas, there were many worries which had engaged part of the government’s mind.

Now comes the main question: Why is the Iranian government taking such a risk, despite its awareness about the poverty of the people, and the overwhelming fear of insurrection and uprising?

The reality is that after years of ambition, the Iranian government has been stuck in the nuclear trap, and its plans to expand its influence with the popular uprisings in Iraq and Lebanon have been muted.

The biting international sanctions have effectively restricted the mullahs’ access to big wind money and the system is unable to respond to domestic expenditures, as it did in the past, especially its mercenaries in Iraq, Lebanon, Syria and Yemen, and to the funding of proxy terrorist groups in the world.

This is why they have chosen to accept all security risks, in full preparedness for repression, so that in this well-known way, they may have the chance to save themselves by plundering the people.

AP: An influential Iraqi cleric living in Iran on...