Iran has been shaken by a wave of nationwide protests since mid-September. The trigger was the death of the 22-year-old Kurdish woman Mahsa Amini in police custody – she had been arrested by the so-called morality police because she is said to have worn her headscarf improperly. The authorities are acting against the demonstrators with increasing severity. The UN human rights commissioner Volker Türk speaks of more than 300 dead and 14,000 arrests.

And last week the UN Human Rights Council approved a fact-finding mission for the regime. This act in addition to the people’s resistance as the main factor, continuing for more than two months, has terrified the regime deep into the bones.

One after the other, heads are trying to reassure the lower ranks of the ruling body that the situation is in their grips and nothing important will change. They are trying to regenerate the regime’s lost prestige, especially of its supreme leader Ali Khamenei, which has become the main target of the people in addition to the Revolutionary Guards and the infamous Basij paramilitary force.

There is no day that the people attack the regime’s bases and burn down its symbols all over the country. This is happening even that most outlying regions, which shows that the regime has lost its legitimacy. Therefore, Khamenei was forced to send the head of the regime’s IRGC, Hossein Salami to Sistan and Baluchestan province.

Not considering the regime’s usual empty rhetoric about foreign enemies, conspiracy theories, and good and evil, he was forced to say that they are ready to sacrifice themselves for the people of this region who have been deprived of all the basic human rights values from the beginning of the mullahs’ era.

He said: “I came here to announce that we are ready to sacrifice ourselves for the people of this land.” Then he was forced to warn and remember the Basij paramilitary forces in that region, that “today, the country is facing a huge world war”, and they should not be scared about the ongoing situation in the country and forget about retreating as he added:

“We are aware of this fact and know that until the enemy does not come out of its nest and until we do not leave the house and until the swords did not meet each other, the enemy will not be defeated, today is the time.” And that they must “make their decision and cannot be neutral.”

The cries of fear can be heard from all parts of the regime. Regime MP Mohamadreza Mobaleghi, and member of the parliamentary Promotion of Virtue and the Prevention of Vice faction, in an interview with the state-run daily Didban on November 28, admitted to the people’s rage about the mullahs and said:

“If I have made a mistake, I should be punished and criticizing a whole currently is wrong. During these two months, we are witnessing events in the country, sights have become more skeptical of the (mullahs) because of the increasing propaganda. Some of the clerics and scholars are leaving their homes in fear without turbans and cloaks.”

In a meeting with the special forces of Tehran, the regime’s president Ebrahim Raisi admitted its fear of the collapse of the forces and said: “Efforts to maintain the system’s security has many benefits. The goal of the enemy is to stop the systems movement and the expansion of the Basij spirit in all different nations.”

Second-in-command of the IRGC, Ali Fadavi said: “For 70 days, inside and outside, they are looking for a new form of enmity. They have started their enmity and we must defend the system. Today is the day of sacrificing ourselves for the system.”

And Friday Prayer leader of Markazi province Ghorbanali Dorri-Najafabadi first begged the people and said: “Dear workers, shopkeepers, and merchants do not be deceived, do not be afraid, and do not cooperate with traitors. You should not allow the enemies of the country to harm it.”

And to prevent more attacks on the Basij he added: “We are all Basijis. We should not think that we are from the contra. We should support them so that they should not feel left alone.”

But more obvious was the speech of Khamenei with some Basij members on November 27. While highlighting Basij’s main duty which is the repression of the people, he tried to encourage them. We can see the disintegration of Khamenei’s forces especially the Basij on his website.

In the picture below the regime tried to introduce four of Iran’s freedom-loving people and heroes as Basijis to encourage them. Sheikh Mohamad Khiabani, Colonel Mohamad Taghi Khan Pesyan, Mirza Kuchik Khan and Rais-Ali Delvari. This shows that besides the regime’s trying to tack its desperate together, it is trying to buy some credibility for itself. 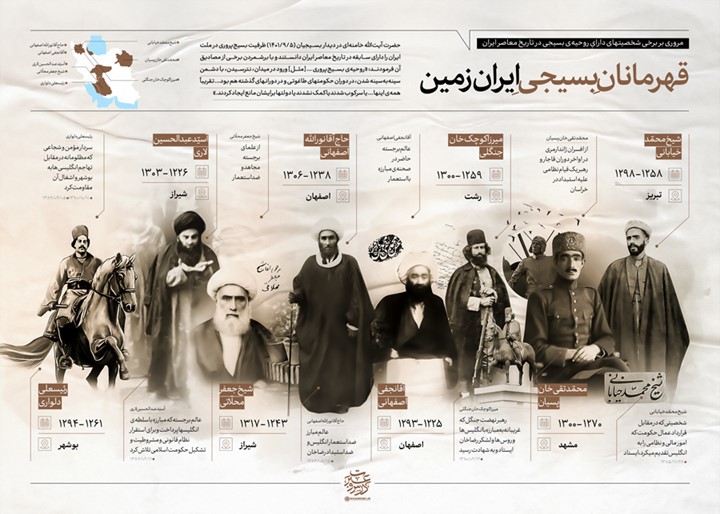 ‘This is Not a Film’ really a sly commentary on Iran

Boston Globe: The title of “This Is Not a...