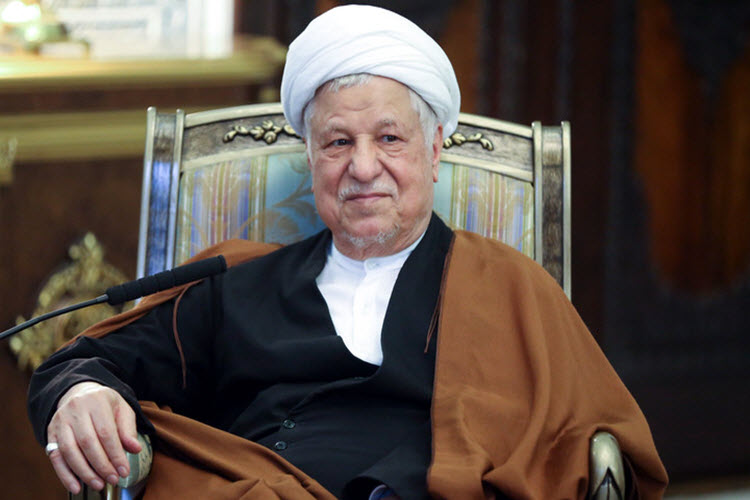 London, 9 Jan – Ali Akbar Hashemi Bahramani known as Rafsanjani died on Sunday 8th of January 2017.He had been the second fascist authority of the Iranian regime since 1979 up to the present. After Khomeini’s Death, Rafsanjani was also one of the two pillars of the Iranian regime and one of the most important factors in maintaining the internal and external balance of the regime.

Ali Akbar Hashemi Rafsanjani was born in 25th of August 1934 in the village of Bahreman near the city of Rafsanjan in Kerman Province to a wealthy family. He studied theology in Qom with Ayatollah Khomeini and he then entered into the world of politics.

In the beginning of Iran’s revolution in 1979, He became the powerful hand of Khomeini. He was also the member of Council of Islamic Revolution and the Minister of Interior. The Combatant Clergy Association and the Islamic Republican Party were also founded by Rafsanjani.

He was also one of the biggest supporters of the Iranian Revolutionary Guards Corps (IRGC) in the early days of the revolution. He also became one of the biggest supporters of the gangs who took over the US Embassy in Tehran in 1980.The hostage crisis became one of the political and economic disasters in a year and half that inflicted enormous financial losses and by that, Iran paid billions of dollars indemnity to Americans.

Rafsanjani played an essential role during the five elections which were held in 1980 and he eliminated all opponents of Khomeini in the elections. He was also the key role in drafting the Islamic Republic constitution. He also became the first Chairman of the Parliament of Iran after the revolution.

He also collaborated in the murder of political prisoners in the early 80s which was one of the bloodiest periods of the Iranian regime throughout the history.

During the 8-year Iran-Iraq war, he was nearly the absolute and undisputed Commander of wars for Iran. He was the person who used the term of “disposable soldiers” in the war and he led thousands of children, adolescents, and students to go on mines.

During the Iran-Iraq war, he on behalf of Khomeini contacted Americans and Israelis and arranged the purchase of arms and ammunition from them. This issue became known as the Iran-Contra scandal in the US.

After the war, he was Khomeini’s accomplice in the massacre of more than 33 thousand political prisoners and Mujahid militants; A crime that was then named “the massacre of 1988”.

At the end of war, he and Khamenei were the founders of the atomic project of the Mullahs; the projects by which hundreds of billions of dollars were squandered in Iran.

He was the founder and the lifelong chairman of the Expediency Discernment Council and the provisional leader of Tehran’s congregational Friday prayers for almost thirty years.

During his presidency, the serial murders happened in Iran and an atmosphere of fear casted the country. He was the first defendant of Mykonos restaurant assassinations, the assassination of Kazem Rajavi and AMIA bombing in Argentina.

He took power after Khomeini’s death and short after he was little by little away from Khamenei in the battle for a greater share of power.

Akbar Hashemi Rafsanjani returned to politics at the end of Ahmadinejad’s presidency and following his hatred toward him and when he was prevented from entering the presidential election, he supported Hassan Rouhani in order to share power.

While Rafsanjani died, this country has become unquiet and turbulent in economic and social terms and it is involved in several foreign wars under the sovereignty of IRGC, the Ministry of Intelligence and plain clothes gangs. Even Rafsanjani’s family are not secure in this country anymore.

Report: US strikes on Iran would risk major war

AP: U.S. military strikes on Iran would shake the...