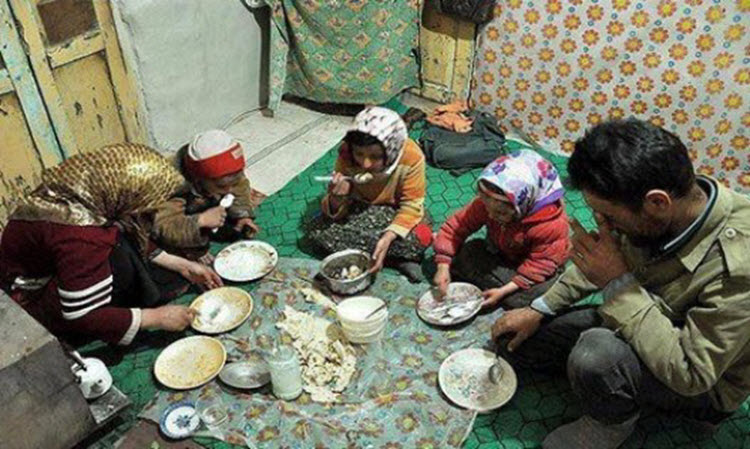 London, 11 Apr – Malnutrition among young children in Iran is now so prevalent that it is considered the norm according to the Salamat News website.

Thr truth is that decades of mismanagement and corruption by the Iranian Regime, have left 30% of families below the relative poverty line and 11% below the absolute poverty line.

As a result, there is simply not enough money for many Iranians to buy enough food for their families and children are now suffering serious side-effects from consistent lack of food including memory loss and stunted growth which can be seen in the children’s extreme thinness and below-average height (as seen in the Sistan and Baluchistan province and the Central Zagros region).

Salamat News said: “Malnutrition in the Central Zagros area is completely forgotten, due to the fact that poverty has become part of everyday life amongst villagers. Some pupils are suffering from memory loss and cannot remember their own names anymore. And the body and body parts of children suffering from this phenomenon are smaller than what would be considered average for their age.”

Teachers across the country can attest to the impact that malnutrition has on a child’s ability to learn; the children are often unable to concentrate on their work and even their senses have begun to deteriorate, meaning that children are finding it hard to see, hear, or even smell because they are so malnourished.

Ali Akbar Sayari, Iran’s deputy health minister is quoted on the Jahan-e Sanat website, as saying that 30% of the population can no longer afford a loaf of bread. This is how serious the situation is.

Other regions that are suffering from malnutrition include the Boyer-Ahmad province and many villages near to the capital of Tehran and on the beltway near the city of Islamshahr, including Zarafshan, Bagh-e Fayz, Mian Abad and Mousa Abad.

According to Donya Jam, an Iranian-American human rights activist, on Vocal Europe: “It is said that one only needs to visit deprived villages across Iran to witness the depth of this catastrophe.”

How could the Iranian Regime let the situation get this far? After all, Iran has the 2nd largest natural gas reserves and 4th largest crude oil reserves in the world.

Well, that money is not spent on the people, whether unemployment needs tackling or a healthcare system needs funding. It is instead spent on the Regime’s nuclear programme, export of terror, and citizen suppression.

The Iranian Revolutionary Guards are spending billions of dollars per year to fight for the Bashar al-Assad regime in Syria and the Houthis in Yemen.

Jam wrote: “With Iran’s presidential election just around the corner, the people are suffering more than ever due to the regime’s catastrophic policies. The Iranian regime continues to plunder the nation’s wealth, and it’s the people and children that have to pay the price of the mullahs’ calamitous decisions.”

By Jubin Katiraie More protests sprung up across Iran on...