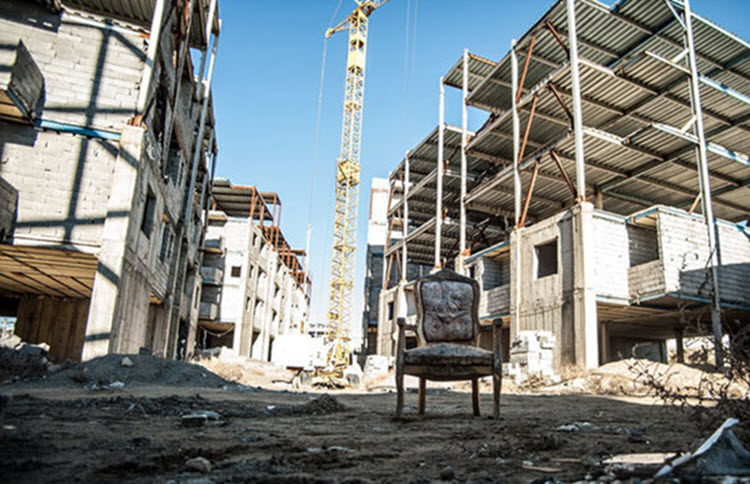 London, 11 Sep – Former President Mahmoud Ahmadinejad advocated for an ambitious housing project that has become a problem for Rouhani and his cabinet. In fact, Rouhani had singled out Mehr Housing project as being a major hurdle to Iran’s already faltering economy, in a televised speech that marked his first 100 days in office.

On Sunday, the deputy minister of Roads and Urban Development said that there are still 200,000 half-built Mehr Housing units across the country, with no buyers for at least 100,000 units. Ahmad Asghari Mehrabadi said that government hopes to encourage people to buy the units by removing any conditions or hurdles to applying for the ownership of the units.

According to official statistics, the Iranian housing market has been nearly stagnant for months. CBI provided numbers showing that 12,000 housing units were sold in Tehran in August — an 11.2% and 33.2% drop, compared with the previous month and same period last year. The Iranian people appear to be more likely to invest in forex and gold markets after the dramatic drop in the exchange rate of the national currency against the dollar.

The quality of MHP units is said to be poor, that lacking in infrastructure and facilities, with unreliable electrical and sewage systems, which makes people skeptical to purchase even the finished apartments.

Abbas Akhoundi, Minister of Roads and Urban development, previously promised that the new units would be delivered “only after infrastructure is complete.” As well, Mehrabadi had promised that the government planned to allocate 10 trillion rials — $250 million at current official rate — to Energy Ministry for development of infrastructures like water supply and electricity.

However, with accusations of corruption and mismanagement within the establishment and its agents, the Iranian people are disinclined to risk the safety dangers of these buildings.

Millions of vacated residential units have further complicated the problem.

As a result of the falling national currency, rather than a real increase in dollar-based value, the price of apartments and rental fees has increased significantly. The average price for one square meter (roughly 10.7 square feet) of residential units in the capital, Tehran, is 74 million rials — roughly $1700 at official rate — which shows 62.1% increase, compared to last year.

Housing developers were offered free state-owned land to build the Mehr Housing Project as affordable residential units for first-time buyers. Banks acted as intermediaries between the developers and the government, and the buyers who signed up for MHP were given 99-year mortgages guaranteed by the state. The government instructed Central Bank of Iran (CBI) to print more money to fund the plan.

Rice sees no US diplomatic mission in Iran for now

Bush hopes diplomacy can persuade Iran away from nuclear weapons