Iran Focus: She fled her family to fight the fundamentalist mullahs. First there was the Shah’s dictatorship, and then there was Ayatollah Khomeini and his band of fanatic mullahs. For four decades, Iran has suffered from dictatorship. 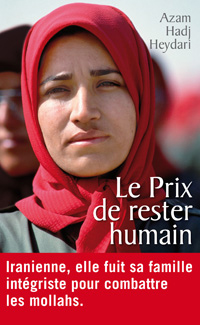 She fled her family to fight the fundamentalist mullahs. First there was the Shah’s dictatorship, and then there was Ayatollah Khomeini and his band of fanatic mullahs. For four decades, Iran has suffered from dictatorship. The ruling theocracy has murdered more than 120,000 people. Azam, a young Iranian girl, grew in the slums of south Tehran. Her father, a religious fanatic, was a supporter of hard-line mullahs opposed to her education. Supported by her mother, an educated and clairvoyant woman, she obtained her diploma. At 13, she narrowly escaped a forced marriage with a mullah. Refusing to join her brothers in fundamentalist groups, Azam continued to oppose her father and as a result was repeatedly beaten. In 1978, Azam, then 20, deprived of love, gagged, beaten and oppressed, escaped home and joined the People’s Mojahedin. She became actively involved and met other oppressed women who had been involved in anti-Shah demonstrations. A new world opened to her. Pursued by Khomeini’s Pasdaran thugs (Islamic Revolutionary Guards Corps), she was arrested. She spent seven years in prison, eight months of it squatting, blindfolded, in a cage. Tortured physically and psychologically, Azam refused to collaborate as her interrogators demanded. 30,000 women were executed in Iranian prisons. In a country where opposition to the government is considered as waging war on God, Azam chose to resist. A riveting and painful testimony about one of the darkest periods of Iran’s history, which disturbing echo the horrors of Nazi concentration camps.

The price of remaining human