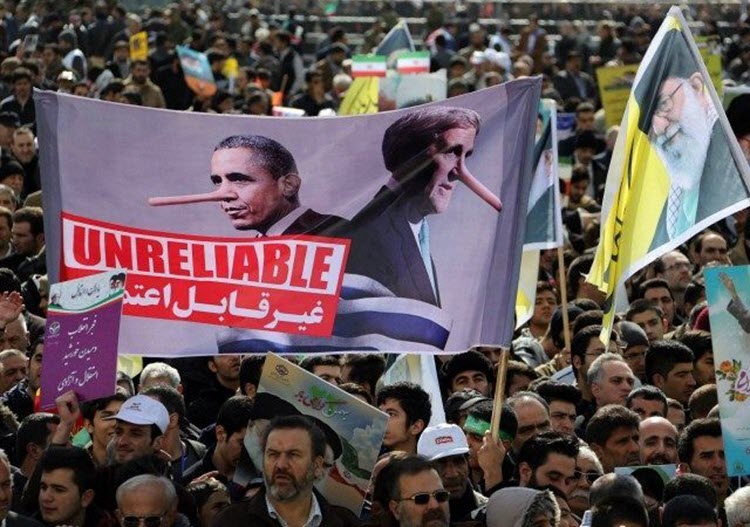 London, 18 Jan – On the anniversary of the implementation of the nuclear deal, the state-run Iranian newspapers slammed President Rouhani and his government for agreeing to such a ‘damaging’ deal.

The paper even claimed that no sanctions had been lifted, but in fact, more had been imposed.

Foad Izadi, a regime expert, was quoted as saying: “These sanctions are still used in different areas and they will never be lifted. One normally negotiates in order to jump out of the frying pan and not into the fire.”

This is of course, ridiculous. Many sanctions have been lifted against Iran, including the ability to do business with American companies like Boeing and Airbus. Donald Trump notably called the accord, the “worst deal” he’d even seen for the US.

Fereydoon Abbasi, the former Head of the regime’s Atomic Energy Organization, claimed that the Fordow Fuel Enrichment Plant should be turned into a museum so that people could see that the plant now served no purpose.

This claim was backed up by Javad Larijani, the international advisor of the regime’s Judiciary, who said:  “The Joint Comprehensive Plan of Action (JCPOA) actually put an end to the nuclear industry of Iran. I once said that this plan has ceased our nuclear activities for good. I still believe the same.”

The International Atomic Energy Agency announced on Monday, that Iran had dismantled that infrastructure and additional centrifuges at the Fordow plant, but it does not excuse Iran’s other violations of the accord.

Iran has (twice!) broken their limits on heavy water production (used to make nuclear weapons) and twice tested ballistic missiles; one daubed with the phrase  “Israel should be wiped off the Earth”.

US Secretary of State John Kerry said: “Our relationship [with Iran] remains highly contentious – and we must maintain our pressure and continue to push back on Iran’s missile program, its support for terrorism, its disregard for human rights, and its destabilizing interference in the affairs of its neighbours as long as these threats persist.”

Iran’s Ahmadinejad pulls out of UN IT summit