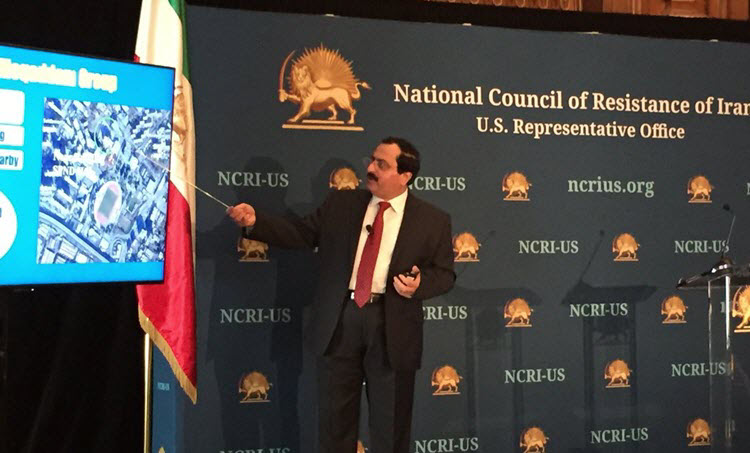 London, 23 Apr – On Friday, the National Council of Resistance of Iran (NCRI), revealed that the Iranian regime is continuing to work on its nuclear program. They were able to provide details about the site where the work is being carried out.

They presented information gathered by the People’s Mojahedin Organization of Iran (PMOI) which has people inside the country, showing that Iran is not adhering to the “spirit” of the nuclear deal as President Trump claimed earlier in the week.

The SPND is the engineering unit that is carrying out the work and is led by head of the group – Mohsen Fakhrizadeh Mahabadi.

The NCRI was able to prove that the work is being carried out on the same scale as before the nuclear deal.

Until now, the site has been kept hidden from the International Atomic Energy Agency (IAEA).

One of the seven subdivisions of the SPND is the Center for Research and Expansion of Technologies on Explosions and Impact (METFAZ) which is developing high-impact and non-conventional explosions. Another subdivision of the group is working with uranium.

The NCRI has revealed information about METFAZ before, but now it knows about a new location.

An NCRI representative said that the METFAZ sites had changed a number of times so that their cover wasn’t blown. Also, to prevent intelligence and information from being leaked, the site is under very heavy IRGC protection.

Speaking about the political effects this information could have, Ms. Soona Samsami, the U.S. Representative of the NCRI, said: “Mrs. Maryam Rajavi, the President-elect of the National Council of Resistance of Iran, has stated time and again, including on November 24, 2013 immediately following the initial agreement of P5+1 with the clerical regime, that if the world powers had acted steadfastly, without economic and political considerations, they could have totally contained the regime’s bomb-making apparatus in that round of negotiations. She had warned: Total implementation of the UN Security Council resolutions, in particular total stop of enrichment, accepting the Additional Protocol, and free and unhindered access of the IAEA inspectors to all suspected centers and facilities, are necessary in order for the regime to give up its drive to acquire nuclear weapons.”

The NCRI recommends 4 steps should be taken.

Secondly, it is imperative that the weaponization program is completely dismantled. SPND should not exist because it has no other purpose than to develop a nuclear bomb.

Thirdly, the regime’s nuclear sites should be totally accessible to inspectors. Access should be unconditional.

Finally, the Possible Military Dimensions (PMD) of the nuclear program need to be established.

A financial hit on Iran?

TIME: Ahead of this week's U.N. Security Council deadline...

AFP: A senior Israeli official dismissed as "absurd" a...