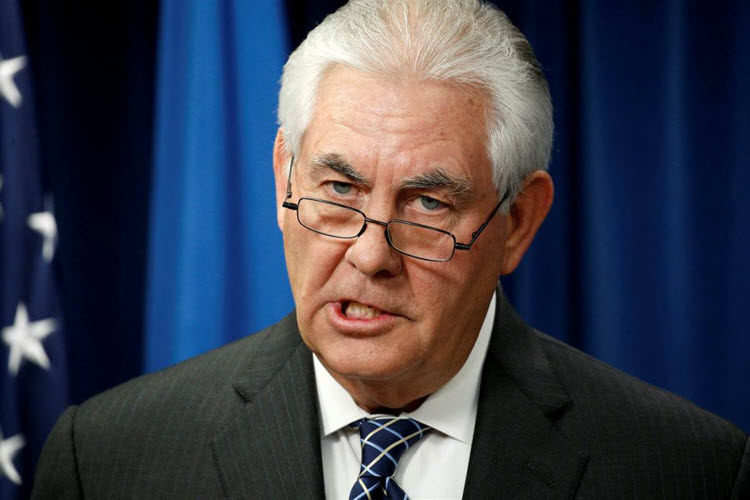 London, 18 Jul – The US Secretary of State Rex Tillerson has certified, for the second time this year that the Iranian Regime is in compliance with the 2015 nuclear deal despite mounting evidence to the contrary.

Senior officials in the Donald Trump administration have said that both Trump and Tillerson are certifying that the Regime is legally complying with the nuclear deal while defaulting on the spirit of the agreement.

However, this is reminiscent of the reports from the White House in April, when the US State Department last certified that Iran was compliant with the deal. The US is required to certify the Iranian Regime’s compliance with the deal.

The “malign activities” which the officials have reported as evidence of breaking the spirit of the deal included development of a ballistic missile programme, support of terrorist groups in the Middle East, support for the Assad Regime in Syria, hostility towards Israel and continued imprisonment of foreigners including US citizens.

The officials noted that the Trump administration would seek to address Iran’s aggressive behaviour in the Gulf region but could not go into detail. They also expect to see more sanctions over the Regime’s ballistic missile program and regional destabilisation.

The White House officials explained that they would strengthen their relationships with their allies in the Middle East in order to stop Iran from potentially skirting parts of the deal.

Mohammed Javad Zarif, the Foreign Minister of Iran, defended the Regime’s compliance with the deal, on Monday.

He said: “I think our compliance is rather straightforward because it’s not for guessing whether we have complied or not. That is very clear, in black and white in the reports of the [International Atomic Energy Agency] which is hardly a sympathiser of Iran. That’s so you don’t need to ask me whether we’ve complied.”

However, international inspectors have not been allowed to inspect the hidden nuclear sites that were uncovered by the Iranian Resistance group, the National Council of Resistance of Iran (NCRI). It is impossible to certify something that you cannot inspect.

Zarif also argued that the US should not seek to establish sanctions against the Regime as they do not work to convince the Regime to alter its behaviour.

However, it is worth noting that the Iranian Regime was economically on its knees when it came to the table to negotiate sanctions relief in exchange for dismantling its nuclear programme. If the sanctions had been left in place, the Regime may have been brought down in favour of a democratic government.