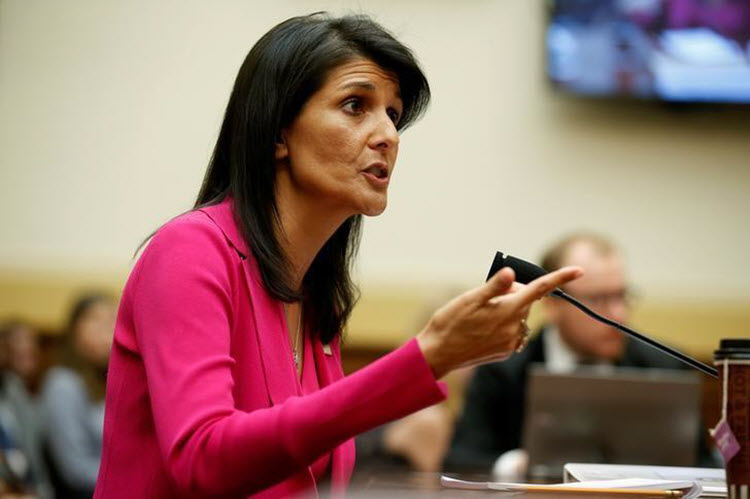 London, 26 Aug – The US Ambassador to the UN has made it clear that the US wants indepedenat inspections of Iranian military and non-military sites to determine whether or not the Iranian Regime is compliant with the 2015 nuclear pact.

Nikki Haley made these comments shortly after returning from meetings at the International Atomic Energy Agency (IAEA) in Vienna.

She said: “As good as the IAEA is, it can only be as good as what they are permitted to see. Iran has publicly declared that it will not allow access to military sites but the Joint Comprehensive Plan of Action (JCPOA) makes no distinction between military and non-military sites.”

Hayley was focused on the Iranian military sites that had not inspected by the IAEA.

She continued: “There are also numerous undeclared sites that have not been inspected yet. That’s a problem.”

At the meeting, she spoke with IAEA Director-General Yukiya Amano in order to enhance the Trump administration’s understanding of Iran’s compliance with the nuclear agreement and ask questions about the military dimensions of Iran’s nuclear facilities.

She said: “I have good confidence in the IAEA, but they are dealing with a country that has a clear history of lying and pursuing covert nuclear programs.”

This meeting came as the war of words between the US and the Iranian Regime is heating up.

On Tuesday, Iran’s nuclear chief, Ali Akbar Salehi, warned that Iran could “resume 20-percent enrichment in, at most five days”.

Under the 2015 deal, the Iranian Regime is banned from enriching uranium to the level at which it can be used in nuclear weapons.

Hayley said that she is trying to improve upon the nuclear deal by stopping Iran from launching ballistic missiles.

In 2017, the US has imposed new sanctions on Iran in response to ballistic missile launches, human rights violations and support of terrorism abroad, which are not addressed in the nuclear deal.

Hayley is pressing for the UN to see launches of ballistic missiles as a violation of the agreement as a result of the UN resolution that binds the nuclear deal.

Earlier this month, she wrote a letter on behalf of France, Germany, the UK and the US, in which she argued that their Simorgh rocket launch was a violation of the agreement as it is capable of carrying a nuclear weapon.

A State Department spokesperson said: “The Administration is continuing to conduct a full review of US policy toward Iran. During the course of this review, the U.S. will continue to aggressively counter Iran’s malign activities in the region and will hold Iran strictly accountable to the requirements of the JCPOA.”

Biden to nudge Iraq on sluggish efforts to form a government

Los Angeles Times: As the U.S. prepares to exit...